READ THIS NEXT
A look back on David Kennedy's creative legacy

Happy first day of fall! It's that time of year again, or will be soon: scarves, boots, pumpkins, crunchy leaves. But before all that, enjoy an (unseasonably) warm weekend as we head into New York Advertising Week on Monday.

Now, onto this week's agency news. 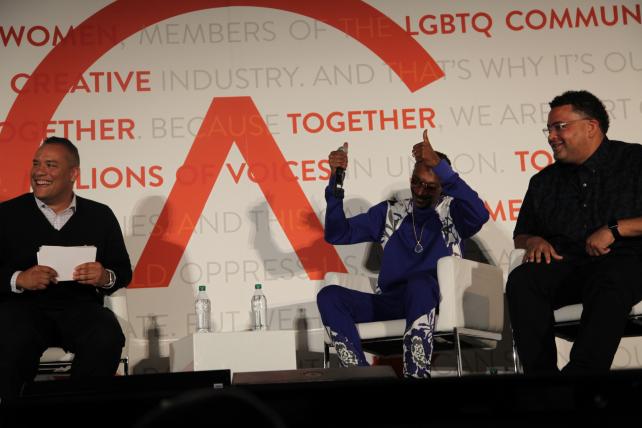 Snoop in the house

The AdColor Conference's TBWA Disruptor Series at the Loews Hollywood Hotel in Los Angeles had a fun guest on its panel Monday: Snoop Dogg. The session, moderated by TBWA's Chief Diversity Officer Doug Melville and included Cashmere Agency CCO Ryan Ford, discussed how Snoop has disrupted conventions throughout his career(s). His ventures include a TV show with Martha Stewart, "Martha and Snoop's Potluck Dinner Party," marketing for films including "Get Out," investments with companies such as Reddit and Lyft, and a Netflix show, "Coach Snoop."

MediaLink is known for very well-attended parties with star-studded performances (The Weeknd and Coldplay's Chris Martin come to mind in recent years). Now, the influential consultancy has hired its new Managing Director of People and Process Brian Offutt from Combs Enterprises, rapper, producer and entrepreneur Sean "Diddy" Combs' portfolio of businesses and investments. Offutt will oversee the company's talent practice and report to MediaLink Chairman and CEO Michael Kassan. "Brian brings unique and varied expertise to MediaLink, including best-in-class experience and practices from global market-leaders like Viacom and Spencer Stuart," Kassan said in a statement.

Deutsch L.A. has picked up creative duties for Canada Dry and Motts, which had been at McGarryBowen. The beverage brands are owned by Dr Pepper Snapple Group. Deutsch already handles the marketer's flagship Dr Pepper and Diet Dr Pepper brands, as well as Snapple and 7Up.

Praytell Agency and Figliulo & Partners have teamed up to bring a fun effort to life for Virgin Atlantic. The transatlantic airline is hosting the #LiveFromVirgin Comedy Festival, the first-ever comedy festival held at 35,000 feet to celebrate that it's the first airline in Europe to offer Wi-Fi across its entire fleet. Broad City actress and comedian Abbi Jacobson is headlining the in-the-sky show on Sept. 28, with help from five other comedians.

After 18 months of integration, Resource/Ammirati has officially become IBM iX. The process brings Resource/Ammirati together with IBM iX Studios in North America, which includes New York; San Francisco; Chicago; Columbus, Ohio; Atlanta; Cambridge, Massachusetts; Toronto; and more offices expected to open soon. Despite its new name, the Resource/Ammirati team will continue to call its office in Columbus home, while maintaining its local and regional client relationships.

WPP's Wunderman has taken a majority stake in Pierry, a Salesfore-focused marketing software integration and solutions company. The deal helps expand Wunderman's technology consulting capabilities in the U.S. and builds on its global relationship with Salesforce. Pierry, which was founded in 2008, has about 100 staffers who focus on strategy, digital, creative and technology across the U.S. and Japan.

"You are all possibilities. You can make it happen. This field is all about you." Thank you, @carolewilliams #ADCOLOR

3 – days until Ad Age's official relaunch, including our new website, logo and magazine.