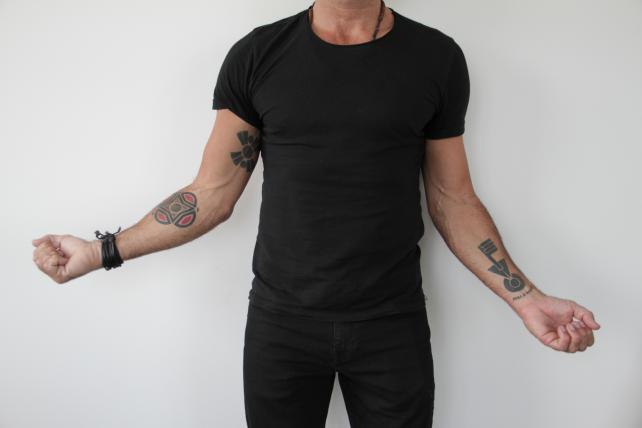 Alma Executive Creative Director Alvar Sunol has three tattoos, each of which contains a figure with a big dot, representative of himself. 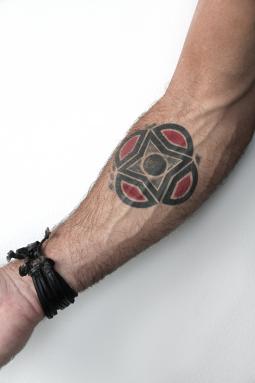 The tattoo on his right forearm represents the "beginning of life" -- the start of his own, in the womb of his mother Amapola (which means Poppy), "a beautiful and delicate field flower," he said. "The tattoo is a graphic and personal representation of a poppy, and I'm the dot inside." 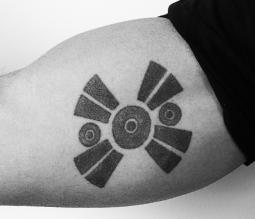 His second tattoo represents the idea that "life is movement." "I've always thought that life is movement and you have to live in constant motion -- movement to escape routines, boredom, movement in search of new experiences and emotions." This feeling drove him to accept an offer to work in Mexico 11 years ago, and the tattoo is a symbol tht the Mayans used to express movement.

"Love of my life," is the theme behind his third tattoo, which he got in honor of his wife Choni, who he met five years ago and with whom he's about to have his first child. He met her on the small of Fuerteventura, which means strong wind.

"In meteorological forecasts, arrows represent the wind and the bars in the tails indicate its intensity.Four bars is the highest intensity. Moreover, the triangle is the symbol that has always represented the woman. In this case, that triangle represents the woman I love most in the world, coming into my life with all the force of the wind at its highest intensity."

The tattoo contains the beginning of a sentence, written in Catalan. The second half cotinues in Spanish on his wife's arm. In its entirety, it reads, "As I have never loved anyone." As a whole the tattoo represents "the key to feel, to live new experiences, not to stay locked in solitude or conformity," he said. "We hold it in our own hands."