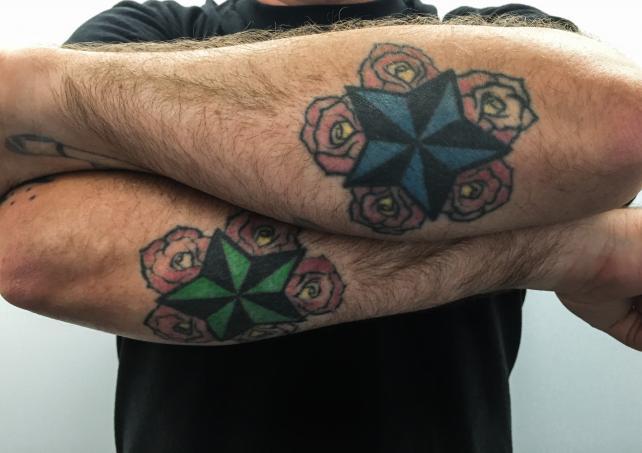 Deutsch L.A. Creative/3D Artist Jeremiah Dapkey got these tattoos from a rookie artist in a quiet little shop in Pasadena, California. "A friend of mine told me of this girl that he thought had some skills, so I told him that I would be willing to try her out," he said. When he arrived at the shop, there were just two people, the artist and a piercer who was just starting out too. "I told her what I was looking for, nautical stars, but I wanted them softened up with some roses, just to be a little different."

As he got the work done, the piercer was testing out his skills giving his first Prince Albert to a guy right next to him. "The vibe in the room was tense to say the least, and once that guy got it done, we were all going to pass out," he said. "Nobody should have to see that. We all took a long break after that, then got right back to business finishing up my work."

That may have been the most interesting part of the experience, but it turns out that Jeremiah's amateur artist was the now famous inker Kat Von D. "They aren't my coolest tattoos, but they had a good story to go along with them," he said.