READ THIS NEXT
Save money, have sex for Valentine's Day: Agency Brief

Happy Friday to many of you who are likely still nursing a hangover from last night's annual Ad Council Public Service Award Dinner in New York City.

Before we head into this week's mishmash of agency news, one thing to keep in mind: Ad Age's A-List and Creativity Awards are back and we're currently accepting entries. Get yours in before final deadlines of December 20 for A-List and January 11 for Creativity.

Peace to the world
Publicis New York has launched the first U.S. campaign for humanitarian organization War Child USA aimed at raising awareness about the global spending on war, which is about $249 per person. The initiative, aptly named $249, includes an animated film narrated by "Stranger Things" star Caleb McLaughlin and features Radiohead's song "No Surprises." Andy Bird, Publicis New York's chief creative officer, says the campaign offers "one of those rare opportunities where we can use powerful creative for both powerful, and meaningful, change." He adds: "War is ugly. War is violent and raw, and not a place for anyone. Especially not for our children. We hope this body of work will make people look at the real cost of war, in a new and personal way. Let's start investing in peace."

Who are you calling chicken?
Chicken processor Pilgrim's Pride named Gravity its agency of record, including a mix of brand strategy, creative development, media planning and buying, digital content and website work. Pilgrim's, with brands including Just BARE and Gold'n Plump, is a longtime supplier to restaurants, grocers and others. Now it's seeking a bigger bite of the branded consumer business, where it faces competitors including Perdue and Tyson.

First lady
Earlier this week, Barri Rafferty was named global CEO of Omnicom agency Ketchum, becoming the first woman chief executive to lead one of the top five largest PR shops. Rafferty officially takes on the role as of January 1 and succeeds Rob Flaherty, who will continue serving as chairman. Rafferty joined Ketchum in 1994 and has served as global president since July 2016.

No abominable media here
Yeti — the abominable snowman-named outdoor brand Ad Age itself said was "reinventing the utilitarian cooler as a status symbol" — has a new media agency. Colorado-based agency Backbone Media has been named media buying agency of record for the 11-year old, Austin, Texas-based brand, handling its planning, buying and performance marketing. Backbone has been Yeti's PR agency of record since 2013. "By pairing our public relations and paid media efforts with one agency, we are able to bridge paid and earned media in a unique way, which will help us win in new and familiar markets," says Yeti's Marketing Director Bill Neff. Plus, we bet those Colorado folks know a thing or two about snow. 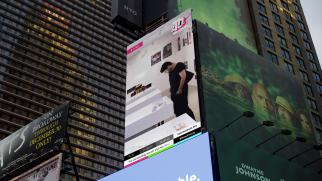 It's alive!
Droga5 and Horizon teamed up to launch a campaign called "New Museum Live" to celebrate the New Museum's 40th anniversary and its commitment to "new art, new ideas." To help bring the campaign to life, the agencies went beyond the boundaries of the museum by live-streaming artwork throughout New York City. From now through December 31, viewers can catch live steams on displays in locations such as Times Square, Hotel Indigo, Mr. Purple, Barcade and more.

Blank creative canvas
Media agency network Canvas Worldwide has its first chief client officer: Kristi Lind, who was formerly a managing director of global accounts at OMD. Canvas, launched in 2015 as a joint venture between indie media giant Horizon Media and Hyundai-backed agency group Innocean, has estimated billings of over $1 billion and counts Hyundai Motor America and Kia Motors America as clients. In her role, Lind will take on new approaches to client/agency relationships, agency innovation, new product offerings and will head up an internal group responsible for Canvas' internal brand and culture. "While keenly focused on honing the client experience, Kristi will also play a role as a key driver of growth for Canvas Worldwide, and work with our leadership team to develop strategies to cultivate our agency culture," said Canvas CEO Paul Woolmington in a statement.