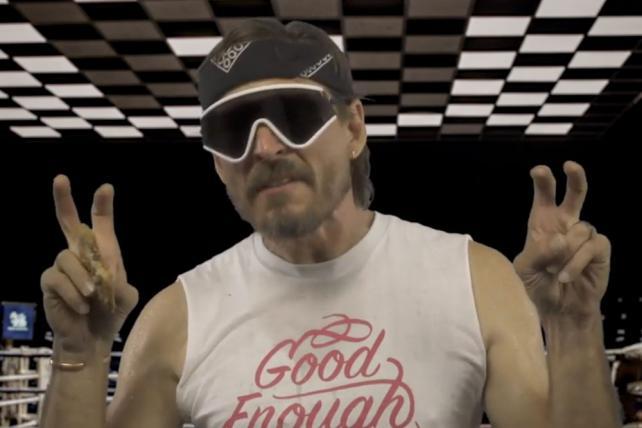 Alex Bogusky is looking for a smackdown.

Social media followers of the chief creative engineer and co-founder at CP&B — who made a much-ballyhooed return to the MDC Partners agency over the summer — have been scratching their heads over some pugilistic postings of late.

In them, Bogusky has been making attempts to find someone to wrestle him. He first challenged 'The Rock' Dwayne Johnson, who recently opened ad agency Seven Bucks Creative. But 'The Rock' was busy. So Bogusky took aim at VaynerMedia CEO Gary Vaynerchuk.

"I do advertising, you do 'advertising,'" Bogusky taunted in a video where he challenged Vaynerchuk to get in the ring with him.

Hey @GaryVee. We have the ring and the ref booked. Let's #Grind! You bring the #hustle I'll bring the #crushingit #HolidayontheRopes Dec 13 in Boulder. $10k to your fave charity if you show. @PencilsofPromise? @VaynerMedia @cpbgroup #RadicalCollaboration #GaryVee #AskGaryVee pic.twitter.com/rThvDe4TlF

In the video caption on LinkedIn, Bogusky wrote "We have the wresting (sic) ring. We have the ref. The lights. The cameras. The audience. Even an ambulance. It's all booked for Dec 13 in Boulder. You bring the #hustle, I'll bring the #crushingit," poking fun at Vaynerchuk's affinity for work-hard platitudes. He promised $10,000 to Vaynerchuk's favorite charity if he shows. (In the video, Bogusky says that if he wins, Vaynerchuk must give up social media for a week. If Bogusky wins, he'll wear a VaynerMedia shirt for a week.)

"You and me, Gary, in the ring, pro-wrestling style, grinding for as long as it takes to determine an undisputed world grinding champion," Bogusky says in the video.

So what's it all about?

CP&B throws a holiday costume party every year, and this year's theme being "wrestling," with a ring, a ref and —if the videos are any indication — some actual wrestling.

It seems Vaynerchuk has taken Bogusky up on the challenge. The two have been exchanging lighthearted jeers on Twitter about their training for the match.

Industry onlookers had a mixed bag of emotions over the showdown — with comments ranging from amusement to withering criticism.

I'm sure that @Bogusky offering to wrestle @garyvee will fix this https://t.co/GSjdPZURz4

Advertising is now the WWE of professions. Sounds about right. 🙁 https://t.co/n9HU0sKPnF

I'll take "things women executives would never do" for $1000, Alex. Oh look, it's the Daily Double.

I didn't think there'd be a non-US politician contender for 'worst Twitter sentence of 2018' but "you bring the hustle, I'll bring the crushingit" is right up there. pic.twitter.com/5NQOezNu38

I feel like they never wrestle instead announce the forming of a new company "Vee Crispin & Bogusky" which instantly returns the MDCA stock price to where it was when Alex walked away. #LongMDCA