READ THIS NEXT
United taps 72andSunny as global creative AOR 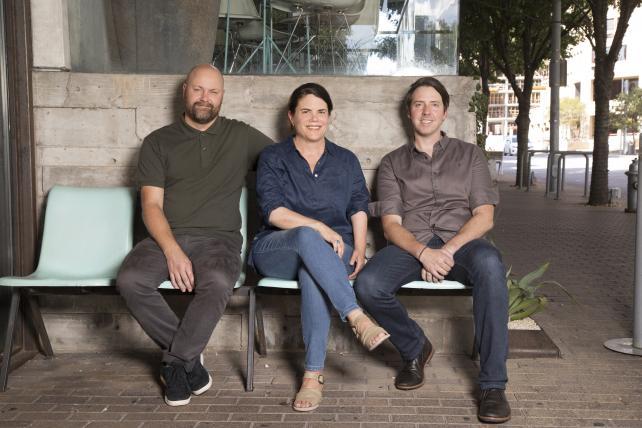 Award-winning creative Craig Allen, who most recently served as a group creative director at Wieden & Kennedy Portland, is opening a new Austin-based agency, Callen (a mashup of his first initial and last name) with partners Niklas Lindstrom and Holly Petitjean. It's the first-ever company to be backed by W&K Portland, but the support comes with a caveat: Callen must remain, like its patron, independent.

W&K will have a minority stake that gets smaller over time, says W&K Global President Dave Luhr.

The industry got its first taste of Allen when he created a candy-making Midas and a man with a prehensile beard for Skittles as an art director at TBWA/Chiat/Day. When he moved to W&K Portland in 2008, he became a key leader on iconic Old Spice work like "The Man Your Man Could Smell Like" and "Responses," as well as campaigns for Coca-Cola, Samsung, Oreo and more. More recently, he directed a mesmerizing interactive music video for Real Estate that required you to color it yourself.

Lindstrom first made waves in the U.S. on ground-breaking digital productions at B-Reel before he moved to agencies including BBDO, Forsman & Bodenfors and, most recently, Droga5, where he was director of interactive production and helped to realize award-winning efforts for Under Armour, Mailchimp, Hennessy and more.

Petitjean is a 20-year industry vet who has worked at shops including Goodby, Silverstein & Partners, Huge, Creature and Possible, where she led accounts for Starbucks, Google, eBay, Budweiser, Pacifico and more.

Allen says he hadn't worked with the pair previously, but that a recent "crappy" experience at an amusement park led him to them, in a way.

"I was thinking, 'Man, it would be such a cool opportunity to make this place better—it might be changing the way they operate, or how employees behave,'" he recalls. When it came time to meeting with prospective partners, Allen asked how they would tackle the park's crappiness problem. Rather than pitching a media or communications plan, both Lindstrom and Petitjan gave the "right" answer, Allen says. "These guys said, I wonder if we could go in there and just change it. That's how I could tell how awesome they were."

Allen's desire to go out out on his own,and his former company's decision to back him represented a "perfect storm" for the parties involved, he says. The agency hadn't been considering the opening of an Austin office, as Wieden has been well-served by both Portland and New York, Luhr says. But when Allen started dropping hints about his next move—or what Allen describes as "a combination of very focused manipulation and black magic"—the idea for Callen started to form.

The decision to support an outside shop for the first time is just the latest step in what has been the agency's "retooling" for the future, says Co-Global Chief Creative Officer Colleen Decourcy. Last year, it moved from a partner to a shareholder model and Decourcy stepped up to her current role, from Global ECD, while Susan Hoffman joined her in that post this past June.

Citing fellow independent agency Droga5, she adds that "we're two oranges in a basket of apples. And we want to see more oranges. The clients need to know that there are more versions of us to pick. This is a normal, healthy, productive and effective way to buy your advertising and marketing. Great work works, and as far as we can tell, independence has a straight line to great work."