DDB, Goodby Seemed to Have Leg Up, but Shop's Chemistry, Work Won Out

DETROIT (AdAge.com) -- If there's such a thing as a surprise account win in a business in which marketers frequently defy logic when it comes to reviewing and selecting agencies, then this was it. 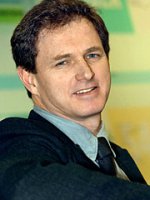 Tim Ellis, VW of America's VP-marketing
To be sure, last Friday's news that Volkswagen of America had tapped Deutsch, Los Angeles, as agency of record for its $200 million ad account made sense. The agency is no rank outsider: It's a sizable shop, based in a city that is increasingly thought of as a car town, and until very recently was turning out decent creative work for struggling carmaker Saturn.

But Deutsch L.A. was far from the favorite when this review cranked into high gear. In fact, most observers would have given shorter odds to at least two of the other leading contenders.

First there was DDB, which has most of VW's ad business in the rest of the world, the supposed support of the German parent company and a longtime, clearly-stated hankering to win back the U.S. business it had for so many years.

There was Goodby, Silverstein & Partners, which is not only one of the best agencies in the country by most people's reckoning, but which also did a sterling job for Hyundai until the Korean automaker decided to take its advertising in-house. Goodby also had the seeming advantage of at least being an Omnicom Group sibling to DDB, theoretically allowing it to work somewhat more seamlessly on cross-border initiatives. The only longer shot than Deutsch might have been Wieden & Kennedy, even though the Portland, Ore., indie is certainly a creative powerhouse.

Uncertainty
Add to that highly-competitive field the fact that in the middle of the review, Deutsch parent Interpublic made the decision to fuse Deutsch together with ailing sibling Lowe, a move that had the potential to disrupt the agency, and create uncertainty in the mind of a marketer that was about to hire them.

So given the odds, just how did Deutsch snare an account that Ad Age recently estimated was the third-most desirable in the still-highly-sought-after car category? Well, firstly it has to be noted that DDB's purported advantage might actually have been a disadvantage. VW's U.S. executives wanted to maintain their independence, according to executives close to the matter.

Still this wasn't a case of the other agencies losing, insisted VW, this was a case of Deutsch L.A. winning -- by quite some margin.

Of course the hoary story that always makes the rounds after a review, often propagated by the losing finalists, is that the decision came down to price. In a marketing business populated by hundreds of procurement executives, that always seems feasible, and in this case the theory was buttressed by reports that the latter stages of the review involved a lot of finance executives -- on both agency and client side -- doing a lot of number-crunching. Yet Tim Ellis, VW of America's VP-marketing and one of the three key decision makers in this review, said price wasn't the key factor here.

"The decision was not based on price, the decision was based on the best agency," he said. "I'm sure every client today is looking for fair value for their agency. We're good Germans and we have strong processes in the way we conduct ourselves financially." Noting that VW is a legendary brand that was advertiser of the year at Cannes, he added: "Why would a brand with that kind of success go to the lowest bidder?"

Bottom-line focus
Rather than besting its rivals on price, Deutsch won for the simple, but vital, reason that it stayed focused on the bottom-line issue of moving metal, and presented the work that most moved the marketer. VW has extremely aggressive growth plans in the U.S., aiming to boost annual new-vehicle sales to 800,000 units by 2018, an ambitious jump over current yearly sales under 300,000. Mr. Ellis also told Adweek that he was impressed by the agency recognizing the importance of including the dealers in all marketing thinking and execution.

Beyond that, Mr. Ellis stressed the multiple talents of the Deutsch team and said that he and his fellow executives felt they had very good chemistry with them right from the get go. He said they offered "a platform that we felt was head and shoulders above the other competitors." He added that the agency was able to find a way to keep the brand's global "Das Auto" tag "that's just been sitting under our logo" in a relevant way that will resonate with American consumers. "That's important," he said, "because it never does any good to have a tagline that doesn't do anything."

Mr. Ellis, who was joined on the decision-making panel by his boss, Stefan Jacoby, president-CEO of VW of America, as well as VW global marketing chief Luca de Meo, admitted that VW faces "an incredibly complex challenge," to "evolve the brand to be more appealing to more people without selling our soul." He indicated VW's main targets will be the top two Japanese transplants here, saying, "VW has always had trouble being relevant and gaining consideration from those who today are Honda and Toyota buyers."

Mike Sheldon, co-CEO of Deutsch, Los Angeles, called the win "a game-changer for the agency." Deutsch already has a lot of people in place for the account following the loss of the Saturn account, and will open a service office in Herndon near VW's headquarters and hire additional staff.

Jeff Goodby, co-chairman of his eponymous agency which made it to the final two in the pitch, wished VW "a lot of luck," adding, "I'm sure we'll find another car company that will be a good fit for us."

Deutsch's victory will be even sweeter for those who were around in 1995, when the agency lost against Arnold in a review for the same account. Deutsch spent 95 days and $360,000 pitching VW, and even laid out $20,000 on a new black Jetta for research. After hearing he didn't win, Donny Deutsch made a quip about said Jetta, saying he wanted to "slam it into a wall."