Why One Greek Agency Started Selling Its Own Sunglasses and Coffee

Greece is well known for its sunny climate and café culture. It's not necessarily known for its side hustles. In Athens, though, Isobar is making the most of strong sun and stronger coffee by starting up two new businesses on the side: sunglasses brand We Are Eyes and a coffee shop called The Side Project.

This moonlighting is driven by a desire to understand on a smaller scale the production and marketing challenges faced by Isobar's clients -- which include Mondelez, L'Oréal, Heineken, Vodafone and Nestlé -- more than it is about bringing in alternative revenue streams. (Still, every bit helps given the near collapse of the Greek economy in recent years.)

Giorgos Vareloglou, who started the agency with Costas Mantziaris, said, "We chose sunglasses because it's a high-margin business which used to be dominated by a few major players, but it's now more open to challenger brands."

The agency tackled everything itself over a period of 10 months: production, design, logistics, pricing, and selling. The advertising campaign, done in-house and starring Isobar employees, was actually the easy part of the whole process and only took two weeks.

Since January 2017, We Are Eyes has sold 3,000 pairs of sunglasses across Europe through its online shop, and is due to launch in Brazil in September. But it hasn't all gone smoothly. They spent $4,000 to target 200,000 people through Google and Facebook when the brand launched in Romania and Bulgaria, but didn't sell a single pair in those two countries.

"It really taught us the power of influencers," Vareloglou admitted. "Without an on-the-ground network, the money was wasted."

The whole experience, however, emboldened the agency to go for a second entrepreneurial venture and set up its own coffee shop. Realizing that the agency's 80 employees spent a total of around $60,000 a year on coffee, it made sense to provide good quality, low price coffee at the agency. 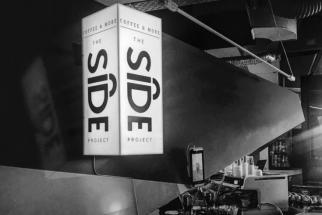 Vareloglou and Mantziaris promised to review pricing every three months and bring down the cost of a coffee if enough people were buying it. After the first review, prices were reduced by 15%, and there are plans to drive down prices even further by taking online orders and delivering locally to expand the customer base.

The duo also sees the coffee shop as a great way to test out consumer behavior. It now sells client Nestlé's ice cream, and has started giving the product away free to the first ice cream customer of the day. That's to test the theory that ice cream consumption is one of the most viral things that happens in the physical world, and will tempt others to buy their own.

And to try and get employees into work earlier, coffee is free between 9 a.m. and 9.30 a.m. (It doesn't actually work, though. "We are in the ad business, after all," laughed Vareloglou.)

Vareloglou and Mantziaris sold their agency, Mindworks, to Dentsu Aegis Network in March 2015 and together they launched Isobar and iProspect in the country at a difficult time economically, when Greece was hard-hit by the Eurozone crisis and reliant on a series of financial bailouts.

Last year, the agency's revenue was up 18%. "I'm an optimist," said Vareloglou. "We are children of the crisis; we were born in the crisis and we grow in the crisis. The recession has forced us to be more creative exploring different ways of doing things."