Incumbent Burnett, Italy, Plans to Defend
READ THIS NEXT
Uncomfortable Conversations: How one DE&I consultant is pushing agency CEOs for real change
The account is said to include advertising duties for watch brands Wyler Vetta and Tribe in addition to Breil.
Credit:

NEW YORK (AdAge.com) -- Luxury watchmaker Binda Group has called a global creative review for its $50 million Breil watch account, according to executives familiar with the situation. 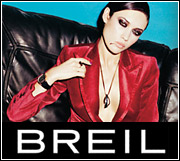 The account is said to include advertising duties for watch brands Wyler Vetta and Tribe in addition to Breil.
Undetermined agencies were invited to attend meetings at the company's headquarters in Milan, Italy, earlier this month. First-round pitches are slated to take place later this month.

Publicis Groupe's Leo Burnett, Italy, will defend the Breil account, according to the agency's spokeswoman.

Includes other brands
The account is said to include advertising duties for watch brands Wyler Vetta and Tribe, as well. WPP Group's United, London, handles the Tribe account, but the shop did not return inquiries about its status in the review.

Binda Group did not immediately respond to requests for comment.

Breil watches, originally launched in 1942, were relaunched in 1994 with a campaign featuring models Monica Bellucci and Carre Otis.

Jeremy Mullman contributed to this report.

Brooke Capps
Brooke Capps is a content consultant for Internet Week. Previously an agency reporter for Advertising Age and a global communications executive for agencies such as Euro RSCG (now Havas) and UM, Brooke hung out her own shingle in 2010. Since then sheâ€™s directed content and strategy for clients such as Cornell University, The Christopher and Dana Reeve Foundation and ?WhatIf! Innovation Partners, among others. This fall, in her capacity as Associate Adjunct Professor at NYUâ€™s Wagner School for Public Service, Brooke will begin building a writing center to promote excellence in public policy communications. Brooke recently received an MA in Media Studies from the New School for Public Engagement.
View all articles by this author
[email protected]
View all articles by this author