CHICAGO (AdAge.com) -- Movie rental giant Blockbuster has shifted ad duties to Havas' Euro RSCG from Omnicom Group's DDB a little more than a year after DDB said it planned to build a standalone unit to service the account. 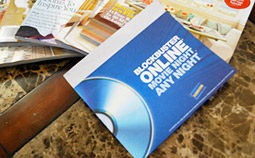 Last February, DDB Worldwide CEO Chuck Brymer declared that the Blockbuster business would be housed in a new, 100-employee unit that would operate out of Dallas and Los Angeles. At the time, Mr. Brymer dubbed the setup an "inventive solution that will enable Blockbuster to engage in specific resources and expertise to build their brand using promotion, merchandising and an array of integrated communication platforms."

Turns out Mr. Brymer and his agency may have overstated the significance of the win, as, barely a year later, Blockbuster has shifted its account to Euro RSCG, Chicago, and DDB has only a small handful of radio ads to show for its investment in the business, which it chased in a lengthy review that began in late 2007.

In a statement, a DDB spokeswoman confirmed the split, saying, "Our contract with Blockbuster ended at close of 2009 and we mutually decided not to further pursue the relationship at that time." It's unclear when Euro was quietly brought onto the account. A Euro spokesman declined to comment, and a Blockbuster spokeswoman said that Euro was one of the company's agencies, but declined to elaborate.

While there have been marketing budget cuts at Blockbuster, that should not have caught Mr. Brymer or his agency by surprise. After all, Blockbuster's previous agency, Southfield, Mich.-based independent Doner, cited the brand's spending cuts as the reason it walked away from the account.

Measured media spending dropped to about $14 million in 2008 from $97 million the previous year. And the challenges brick-and-mortar video-store operators face from online competitors such as Netflix were already abundantly clear at the time.

But Blockbuster CEO Jim Keyes, who formerly held the same post at 7-Eleven, wanted a custom-built agency solution and, despite the obvious red flags, DDB complied, putting its video production and movie-trailer business the Ant Farm; Uproar, a youth-marketing agency; and DDB's branded-entertainment team in Los Angeles all under the DDB Entertainment umbrella to serve Blockbuster.

Asked to explain making such a big bet on such a distressed client, one executive familiar with DDB's planning said the agency was enticed by reports circulating at the time that Blockbuster might merge with Circuit City, creating an entertainment-retail giant. But a deal never happened and Circuit City wound up shutting down its stores last year. (It remains in the online-retailing business.)

But less than a month after that move, Blockbuster's stock price crashed as it announced it was exploring bankruptcy, and that put a chill on ad spending.

Since Blockbuster had largely stopped spending already, it's unlikely the account loss will put much of a dent in DDB's finances or cause layoffs. Still, the U.S. agency network can ill afford even incremental losses of business considering its already parted with significant chunks of its State Farm and Wrigley accounts this year.

It's unclear to what extent Blockbuster's marketing budget will rebound now that Euro handles the business, but it seems likely that the company will want to spread word of a recently signed deal with Warner Bros. that gives it the studio's new releases four weeks before competitors. And Euro will certainly welcome the new business after parting ways with Valspar Paint earlier this year.