Agencies are known for pulling all kinds of stunts, so it's tough to surprise us. But we were genuinely taken aback when we noted the launch of a website called BreakUpWithYourAdAgency.com. 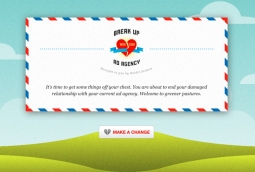 It's meant to be a big gag, where clients can generate a fake letter to agencies, either letting them down easy with one containing pictures of butterflies and bunnies; or one with pictures of tombstones and skulls that tells them to rot in hell.

A couple of years ago we devoted an entire issue to fixing the strained client-agency relationship, and annually we produce an industry-relationship themed issue, so we were puzzled when we saw this.

Why would an agency, knowing the challenges that shops today face in maintaining a lasting relationship -- everything from shortened CMO tenure to cutbacks in marketing budgets -- make light of the issues?

"It's meant to be for fun and show our agency's creativity," said Brent Sims, VP at Rockit Science. "It puts everybody on alert that there's young and aggressive ad agencies out there and they're not going to sit on their laurels. ... We're basically putting everyone on notice."

The shop lists clients such as the U.S. Navy, Louisiana Highway Commission and Pepsi. The last is currently trimming its agency roster dramatically. (Rockit Science says it's not currently engaged with the beverage giant).

"We're not promoting strained relationships ... but old agencies leaving and new agencies coming in," Mr. Sims said. According to him, clients are having trouble with agencies that "are not adopting the principles behind social media," and "we've heard from our clients that it's hard to dissolve those relationships."

What do you think? Is it a funny stunt or a sad, distressing commentary on the trials of being in agency business?