Campbell Soup Co. is expanding its agency roster to include smaller agencies which will be tasked to handle new products such as microwavable soup pouches and the company's growing line of dinner sauces.

The marketer will retain WPP's Y&R and Omnicom Group's BBDO as its lead agencies on established brands such as its core soups and Pepperidge Farm cookies, crackers and chips. But it is shifting smaller accounts out of those shops to two sibling agencies, WPP's TAXI in Toronto and Omnicom's GSD&M in Austin. 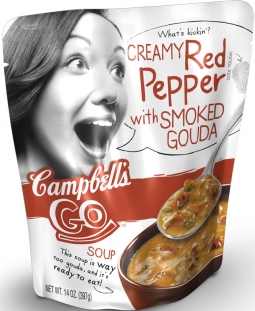 The agencies either declined to comment or couldn't be immediately reached. Campbell's says the moves aren't about cracks in its relationships with established agencies, but rather a marketing strategy that will put special focus on products that emerge from the packaged goods giant's innovation pipeline -- a priority of CEO Denise Morrison, who took the reins in late 2011.

"On the innovation front, we needed specialized focus and attention," spokeswoman Carla Burigatto said. "We have set up our breakthrough innovation process with small teams that are acting like start-ups with big company resources. And we wanted our partners and our agencies to be able work the same way."

Taxi will handle the Campbell's Go line of microwavable soup pouches, which had been at Y&R. GSD&M will get the dinner sauce business, which includes Campbell Skillet Sauces and Campbell's Slow Cooker Sauces, which are expected to hit the market soon. BBDO had been handling the Skillet brand.

As the designated agencies for the marketer's "breakthrough innovation portfolio," Taxi and GSD&M are in good position to land other new brands and products as they are developed, which could lead to more business being handed to both shops. Campbell did not conduct a formal agency review. "We are always meeting with agencies of various sizes and skill sets over the course of the year for various projects, and this was the result of some of those meetings and chemistry checks," Ms. Burigatto said.

Campbell introduced the Go Soups and Skillet sauces last year in a move to win over millennial consumers. As such, both brands have been primarily supported with digital advertising. But on a recent earnings call, Ms. Morrison said TV will soon become part of the marketing mix for new products. "We have seen that in addition to attracting Millennials and affluent consumers, the products are having broader appeal than what we expected and that's a good thing," she said. "So the TV advertising does make sense."

The company is one of the 100 largest advertisers in the country, according to the Ad Age DataCenter. In 2012, Campbell Soup Co.spent nearly $505 million on U.S. advertising and for the past several years marketing and selling expenses as a percent of sales have hovered around 13%.