As Chevy Heads to McCann, 200 Staffers Must Decide if They Want To Go, Too | Ad Age
Skip to main content
Sign In Register

As Chevy Heads to McCann, 200 Staffers Must Decide if They Want To Go, Too

The nearly 200 employees who'd been hired by Goodby Silverstein & Partners to work on the General Motors business have a big decision to make: should they go to work for McCann, to which the Chevy account will be transitioning over the next few weeks, or take their talents to a new shop?

GM today made official the news Ad Age broke on March 8 of talks between the carmaker and Commonwealth execs to remove Omnicom Group's GSP from the equation and put Interpublic Group of Cos.' McCann in the driver's seat at the agency.

The move gives McCann global ad responsibilities for Chevy. When Ad Age originally reported the news, GSP Founder Jeff Goodby told Ad Age he hadn't been made aware by GM Interim CMO Alan Batey that any of those discussions were taking place. That changed rapidly as the news began spreading like wildfire in Detroit. The agencies have since been in a holding pattern waiting for the automaker to publicly address the changes.

Said Mr. Goodby in a statement: "We are immensely proud of the work we've done for Chevrolet, both before and after the creation of Commonwealth. There is no brand quite like this one, and we feel that the record of sales and heart we have helped begin will serve them well as they 'Find New Roads.' Above all, we have made great friends at GM, McCann, and especially, in the incomparable city of Detroit. I will miss it."

However, GSP parent Omnicom doesn't lose its place on the GM roster entirely. Agency 720 -- a unit that handles some Chevy retail business -- and Fleishman-Hillard, which has been handling public relations, will continue to work with Commonwealth.

When Commonwealth was formed as a 50-50 joint venture between two agencies at two different holding companies, it prompted a lot of skepticism across the industry that it could ever work. Given that the unit has been completely redone within less than a year, and it will be now a structure whose revenue will go to just a single agency, the critics were probably right. At the same time GM seems intent on undoing a lot of the decisions made under CMO Joel Ewanick, and the elimination of GSP as Chevy's agency fits right into that pattern.

While the foundation under the house Mr. Ewanick built is shifting, Commonwealth in name and structure (outside of the joint venture aspect) isn't going away. Because the agency has a presence in 12 markets, GM wants to keep it intact. The moniker -- which came from a coffeeshop in Detroit and was meant to express the idea of "unity" -- is now a bit of a misnomer, though, given all Chevy advertising is now consolidated under McCann.

Prior to the setup of the Commonwealth structure in April 2012, GSP was handling domestic advertising for Chevy, while McCann had duties in many of the most important non-U.S. markets for General Motors. Those included: China, India, Brazil, Japan, Canada, Mexico, and Latin America.

Creating Commonwealth greatly reduced the number agencies working with GM and was part of the automaker's push to wring $2 billion from marketing costs over five years. The ad account had earlier been spread among 70 agencies, and GM was looking for both efficiencies and cost reduction. 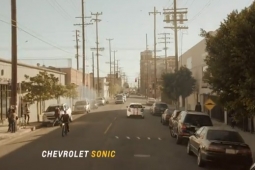 From the latest installment for the Chevy "Find New Roads" campaign

According to executives familiar with the situation, now felt like an appropriate time to enact the shakeup of Commonwealth, since the majority of the "Find New Roads" work -- a major overhaul -- is completed. It was led Mr. Goodby, whose title was chairman, as well as a leadership team that included McCann top creative Linus Karlsson, among others.

"Commonwealth remains Chevrolet's global agency of record and a key partner as we launch 25 products globally in 2013 and roll out our 'Find New Roads' brand promise," said Mr. Batey in a statement. "Chevrolet is building enthusiasm around the world for its products and we look forward to working with the Commonwealth team to continue our momentum. Any change in ownership structure should have no impact on our plans to grow the Chevrolet brand around the world."

What will be a tough pill to swallow for many of the employees of GSP who were a part of Commonwealth is now having to report to McCann and its parent, Interpublic. Although many of them had been working under the same roof for the past 11 months, culturally the employees hired by Goodby felt like they were a part of that agency. Now they'll have to decide whether they want to be part of McCann.

Still, at the end of the day, the opportunity to keep their jobs -- and continue work from the same office, with the same people -- may prove compelling for the majority of them.

Meanwhile, Cadillac is likely heading to a new agency too, with a review underway that includes incumbent Fallon. Another Interpublic shop, Campbell-Ewald, is tipped to emerge with a large portion of the work.

If that pans out, it'll be like GM stepped into a time capsule and traveled back to its ad relationships of several decades ago -- a time when it worked with a single agency for a single brand.