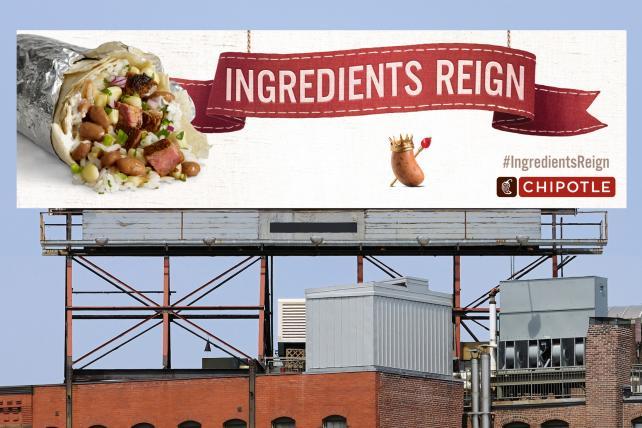 The fast-casual chain worked with Pile and Company on the reviews. Chipotle said it considered nearly 20 potential agency partners. Incumbent GSD&M was invited to compete for the business. Representatives from the agency were not immediately available for comment.

Mediahub, which works with the likes of Netflix, Bose, JetBlue, Royal Caribbean and Patron, will run the business out of its Boston office.

For Venables, the win follows the agency's debut of its first work for Westin Hotels & Resorts earlier this month. The agency is also handling Audi's Super Bowl spot to air Feb. 5.

"After considering some extremely talented agencies, we decided that retaining two best in class partners to work with us on the advertising and media roles gave us the best combination of talent to help us as we continue to evolve our marketing programs," Mark Crumpacker, Chipotle's chief marketing and development officer, said in a statement. "Venables impressed us from the beginning with their insights and ability to translate our strategy into really compelling advertising, while Mediahub demonstrated extraordinary analytic and media targeting capabilities. Working together with our internal marketing team and these new agency partners positions us well to improve the impact of our marketing programs over the coming months."

While the media budget was not disclosed, people with knowledge of the matter said Chipotle plans on significantly dialing up its spend this year. And earlier this month, Chipotle said it is planning for its biggest campaign to date, set to launch in April. Plans for 2017 include a TV show for kids and the potential introduction of a dessert item, Mr. Crumpacker said during a Jan. 10 presentation.

Working with GSD&M, Denver-based Chipotle already greatly increased its marketing and promotional spending levels as a percentage of sales in 2016 as it worked to recover from food safety concerns. Chipotle has overhauled everything from its food preparation techniques to the composition of its executive suite and its board of directors as it tries to recover from the fallout after people became ill after eating at some of its restaurants and many patrons stopped visiting.

Chipotle said it would keep working with GSD&M through the remainder of its ongoing "Ingredients Reign" campaign. The chain also works with other agencies in areas including design, social media, public relations, and digital and mobile services.