Marketers and Media Join 'Not There' Push for Women's Rights
READ THIS NEXT
Samsung’s reality show looks to capture more than pictures and Dentsu hires a DE&I executive: Agency Brief
Familiar ads without the usual images of women, part of the Clinton Foundation's 'Not There' campaign
Credit:

The Bill, Hillary & Chelsea Clinton Foundation introduced an ad campaign on Sunday with the theme "Not There," drawing attention to women's rights on International Women's Day by rendering ads and magazine covers without any women. Cooperating marketers and media companies include Unilever, Under Armour, H&M, Diane von Furstenberg, Conde Nast, Refinery29, iHeartRadio and Snapchat.

A 90-second video features the voices of celebrities including Amy Poehler, Cameron Diaz, Sienna Miller and Jenny Slate while playing on the fact that they do not actually appear. The ads and video direct viewers to the Not There website, which houses the No Ceiling Full Participation report -- data related to women's rights such as compensation statistics and maternal mortality rates from the last 20 years. The site also encourages visitors to take part in some form or other, from "making a statement" by replacing social media profile photos with a blank female silhouette to supporting female comedians and film directors by attending their shows and screenings of the films. 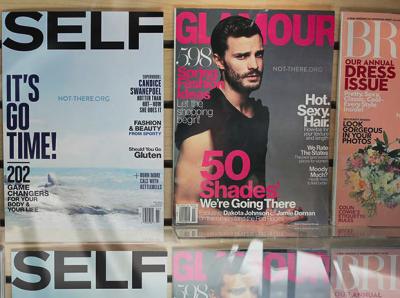 A display of Conde Nast magazine covers without images of women

In other executions, a Beats by Dre ad on Clear Channel Outdoor's large digital will remove images of women and promote the website, the Clinton Foundation said, and the campaign will appear in Snapchat's channel on Snapchat Discover, the app's area for media brands.

"We are taking a collective stand that full participation for women and girls anywhere and everywhere remains the unfinished business of the 21st century," Clinton Foundation Vice Chair Chelsea Clinton said in a statement. "By knowing the facts and what has worked and hasn't worked to advance gender equality, we can accelerate the pace of change for women and girls -- both at home and around the world."

The campaign was created by Droga5.