Cool 'Toys' Agencies Give Their Employees to Keep Them Creative

Rubik's Cubes, step aside. These days, agencies are giving their employees more high-tech gadgets and creative outlets in the hopes it'll keep staffers' brains ticking -- and in turn, lead to more innovative work for clients. Below, a few "toys" that agency folks these days are lucky enough to have at their disposal. Got more examples? Tell us in the comments.

The Barbarian Group keeps a couple Twines around for its Barbarians to play with. Twine is a wireless module by Supermechanical that comes with two sensors to detect temperature and speed, but with the option to add more Users can set rules -- detect moisture and send a text -- so they can be notified via text, email or tweet when their bathtub floods.

Lots of agencies keep a few of these around. KBS+ has a Form 1, while BBDO New York has the makerbot replicator 2. JWT New York used its Makerbot to print the king and queen crowns at its annual party, which was Prom-themed this year.

On hand at BBDO and at The Barbarian Group are these cool headsets, which transport you to another world when you just put the goggles on.

The Barbarian Group lets its staffers play with the "Mindwave," a headset that measures EEG levels to test concentration and attention as you're doing different tasks. KBS+ has another EEG reader from Neurosky that uses EEG and brainwaves to "talk" to iPhones.

A DJ cabin at +Castro lets staffers plug in their music and become the agency's official DJ, starting at 5 p.m. every day. Everyone listens, and someone always dances.

Droga5 took the ping pong table from its 2010 Puma Social campaign and put it in its lounge. It has reportedly helped the agency crack briefs, and spawned the "official" Droga5 ping pong team.

No surprise that KBS+ has a few of these lying around, since the agency in March created a campaign to become a Glass Explorer.

Work Club's own Ramon Illobre has designed a remote-controlled car that has been souped up with infrared LEDs that detects the car's orientation and position. The accompanying software lets staffers drive it using iOS apps and midi controllers. 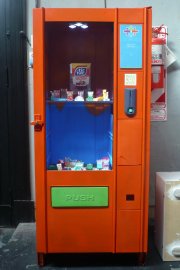 KBS+ doesn't provide these small aerial vehicles per se, but according to president Ed Brojerdi, a bunch of the crew bought them and has been flying them around the office.

What's an advertising agency without a vending machine being used for something other than spitting out soda? Argentina's +Castro invites staffers to make personal exhibitions every month that are then displayed in vending machines.