NEW YORK (AdAge.com) -- That sucking sound you hear coming from Madison Avenue is what happens when the industry's most-awarded creative department runs out the door after the departure of its leader. 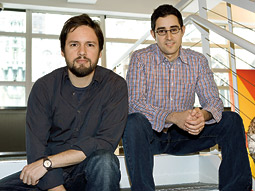 Blow to New york outpost
The departures are a major blow to TBWA's New York outpost, which despite recent success on the awards circuit has had a hard time achieving long-term stability. Even as it was cleaning up on awards circuit, the agency has had trouble gaining any new-business momentum, and it suffered a major revenue blow last year when Sprint moved its massive account to Omnicom sibling Goodby, Silverstein & Partners, San Francisco. Conventional wisdom holds that for a global agency to work it needs a strong hub in New York, though TBWA for years thrived without one. Its U.S. strength has traditionally been in its Playa del Rey, Calif, office, where ads for Apple and Nissan are made.

The search for Mr. Graf's replacement is ongoing, and while "there's no shortage of interest," TBWA Worldwide President-CEO Tom Carroll said in an interview earlier this month, that individual will have "some big shoes to fill." Shoes and with these departures staff positions as well.

Under Mr. Graf's leadership, TBWA was the most awarded agency in 2007, according to Creativity magazine, and responsible for more than half of the network's overall haul of Cannes Lions, Clios, Andys and whatnot.

Granger's start date?
At Y&R, Messrs. Vitrone and Reichenthal will work under new creative boss Tony Granger, whom Mr. Graf replaced at Saatchi, and will be tasked with helping to turn around the struggling network.

In an interview, Y&R Global CEO Hamish McLennan said he began having conversations with the duo -- who are known for their work on the Mars roster of brands, including Skittles, Snickers and Combos -- during the Cannes Lions last year. Mr. McLennan is aiming to get them in by early April; Mr. Granger's arrival, however, is another story. Mr. McLennan declined to comment on the status of Mr. Granger's official start date, which is said to be delayed by Saatchi's execution of a noncompete clause in his contract.