Agency Will Field Creative Projects, Brand Building For Rising Star
READ THIS NEXT
Q&A: Rob Reilly explains why he is moving to WPP 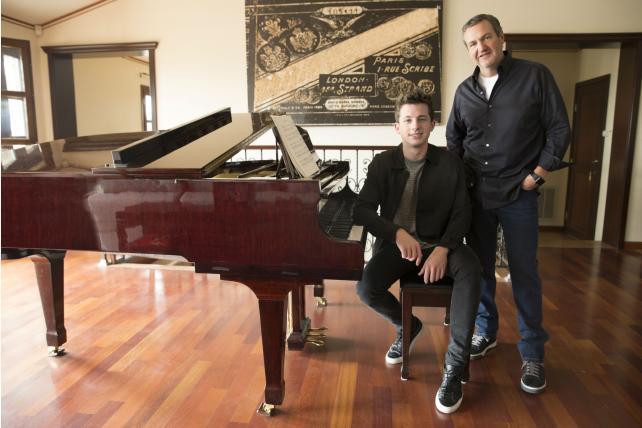 How far was Deutsch from a big music client? One Call Away.

About a year after developing its music division, Deutsch has inked a deal with Charlie Puth, the singer/songwriter known for tunes including "See You Again," "Marvin Gaye" and "One Call Away," helping the rising popstar on creative projects and brand-building initiatives.

DeutschMusic, which opened in fall 2014, began working with the Grammy-nominated artist toward the end of last year. The partnership emerged from existing relationships that Dave Rocco, senior VP-music creative director at Deutsch, had with music industry executives. They include Mike Caren, head of Mr. Puth's label and worldwide president of A&R at Warner Music Group, and Troy Carter, founder of CEO of Atom Factory, which represents Mr. Puth, as well as Meghan Trainor.

Prior to bringing on Mr. Puth, Deutsch CEO Mike Sheldon said the music division talked to a lot of other bands and artists, but none of them were the right fit. Mr. Puth is currently DeutschMusic's sole client, but Mr. Sheldon said the agency is in the process of meeting with at least a dozen potential candidates.

"When we start working with artists, we find out what they believe in and who they are as human beings and that develops into a strategy or mission for their lives and a narrative around how they want to position themselves in the world," said Mr. Sheldon.

He added that it's "not a one-meeting thing," which is why the Deutsch team has spent a lot of time getting to know Mr. Puth over the last few months.

The 24-year-old singer, who writes his own music, said via email that he chose to work with Deutsch because of the agency's passion for his project as an artist.

"Just like collaborating with another songwriter, Deutsch pulls the best out of me and makes me use different parts of my creative mind that I may not have tapped into alone," said Mr. Puth in an email. "I love that I can talk to the people of Deutsch at any time of the day and shoot them ideas."

For Mr. Puth's album, Nine Track Mind, being released on Jan. 29, DeutschMusic assisted with name development, art and packaging. The agency, which will work with Mr. Puth for at least a year, also advises him on social media.

"We're not replacing the label nor are we competing with the label; we are enhancing the label's offering," said Mr. Sheldon. "We sit down with the label, Charlie and his manager and we serve as a critical, strategic and executional partner for what's needed."

Mr. Carter said he thinks working with Deutsch is an innovative approach that provides Mr. Puth with additional creative resources. He admitted that "it was a bit of a learning curve in the beginning" to get everyone to work together seamlessly, but eventually they found a rhythm.

One of the benefits of working with Deutsch, according to Mr. Caren, is that it's helped bring a fresh perspective by exploring new territory.

In addition to the business aspects of DeutschMusic, Mr. Sheldon said the division has a "give-back" element, focused on making it easier for young musicians to become successful.

"We really believe that music enhances one's quality of life. It inspires us and helps us cope; it's a partner when we're driving in our car; it narrates the background of our parties – it's a critical component of our lives," he said.

CORRECTION: An earlier version of this story included misinformation from Deutsch about its scope of work with Mr. Puth, which does not include merchandising or music video shooting/editing.