Inside 'Diet Madison Avenue': The Anonymous Instagrammers Who Get Nasty in the Fight Against Alleged Predators 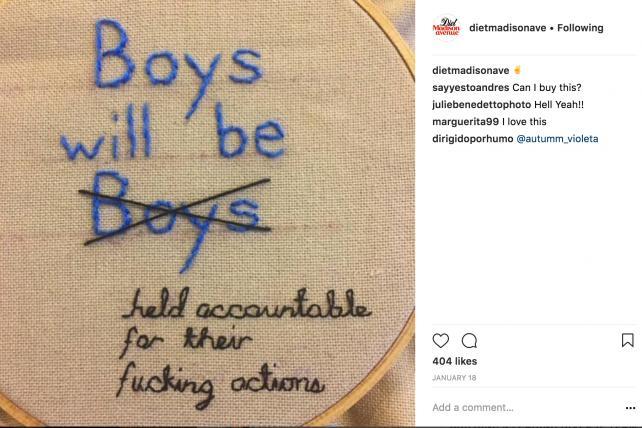 With those words, the anonymous Instagram account that's been taking deadly aim at prominent men in the ad industry announces its next intended target. Since January, the account, "Diet Madison Avenue," has been naming and shaming industry execs it says have engaged in sexual harassment. In the past month, it's become a twisted parlor game within the industry: Who's next?

Well, we know who was last: Droga5 chief creative officer Ted Royer, who was let go Thursday, and who was one of three executives named in the account who became the subjects of internal investigations within those agencies, and have since left their jobs.

Diet Madison Avenue's tactics can come off as threatening and crude: It uses graphic language (calling some people "pricks") and even addressed the wife of one target directly. But the people behind the site, who communicated with Ad Age via Instagram Messenger to keep their anonymity, point out the page is private. And they have posted several times in Stories that it's not a gossip page—it researches everything it publishes with multiple sources, they say. They also say they collaborate with lawyers, PhD students and professors.

As for the tone of the account, "advertising is snarky and not always palatable" and "plenty of snark and cursing goes on at work," the people behind it said by Messenger. "We understand that some support us and some don't. We have always understood that we are one small spoke in a larger wheel of this broader movement."

The account isn't afraid to get rough: It called Alexander an "asshole"; it has tweeted at senior leaders asking why they are hiring and promoting sexual predators; it wrote "GTFO" when Colman was let go and tacked on hashtags including #fired #serialpredator. It address agencies by name with "we're watching you"; it posts emails by victims detailing alleged harassment with names blanked out.

The group is run by a "collective" of 17 men and women who all have various day jobs in advertising, with additional assistance from 42 people on content creation, copy-writing design strategy and website and community management, according to the account. It now has 7,500 followers and counting, they say.

It has also generated a great deal of conflicting emotions in the industry, with many critical of its tactics but appreciative of its mission. If nothing else, it has everybody talking.

Many of those outside of Diet Madison Avenue interviewed for this story asked not to be identified for one of two reasons: They don't want their words to be taken out of context, or they fear retaliation from the group, which regularly updates its Instagram stories and names not only alleged sexual harassers but people they believe to be complicit, such as HR professionals and other agency executives.

"It's hard to ignore, but it's also been hard to embrace," says one female agency executive of the site. "It's true that Diet Madison Avenue is creating important dialog around putting an end to sexual harassment and inequality in the workplace. But unfortunately many of us have felt that its tone doesn't match the sobriety of this topic."

The group says it gets its information from women who have been harassed in the industry and that the stories it publishes have been "diligently" vetted. They told Ad Age that they make sure to "corroborate and verify the stories of individuals coming forward."

And they argue that they must operate covertly to protect informants: "Many of them have shared their story with us because we are anonymous and they are trusting us, and we are safeguarding them and their story."

It's that anonymity that some feel is doing more harm than good, keeping the accused from confronting their accusers. And then there are those who say their biggest fear is seeing the name of a colleague, friend, boss or mentor pop up in one of the posts for alleged inappropriate behavior.

One agency CEO told Ad Age that the "mere existence of Diet Madison Avenue speaks to the very real issue of sexual harassment. But anonymous attacks with unknown evidence can yield stray bullets that hit innocent people. And once an accusation is launched, no matter what a court may or may not find, it's game over for that person's reputation."

"One of two things is happening," says Kat Gordon, CEO of The 3% Movement, which aims to bring more diversity to the creativity ranks. "Either Diet Madison Avenue knows who the offenders are before agencies do, suggesting a culture-of-fear problem, or agencies know before Diet Madison Avenue and do nothing."

All of the agencies the organization has surveyed in its benchmarking survey, says Gordon, had zero-tolerance sexual harassment policies. Clearly, safe reporting and clear consequences are lacking in the industry, she says, and the bigger culture problem needs to be fixed.

"It's getting people to talk and I think that's great," a consultant who wished to remain anonymous tells Ad Age. "They've obviously put a lot of pressure on the industry. I don't think the situation at Droga would've happened without them."

"Transparency and candor are crucial pillars of a free and equal world, so no one who is innocent has anything to fear," she says. "The people who are harassing women and men must be called out in a public forum. Otherwise, how will this behavior end?"

However, Badger does question the lack of transparency on Diet Madison Avenue: "They provide no link to their process. I would like to know their standards."

Another industry leader who, asking without irony to also remain anonymous, says "the kitschy branding, heavy reliance on anonymous sources, and of course its medium of choice, Instagram Stories, makes this effort feel a lot more In Touch than Washington Post. [There's] an integrity and a code of ethics lacking that people need in the news now more than ever."

Another female agency leader called Diet Madison Avenue a "slippery slope," saying just because someone's name turns up on the list doesn't automatically mean they're guilty. "There's the risk of witch-hunting," she says.

Diet Madison Avenue resists that narrative, saying it doesn't see itself as any different than anonymous advertising networking app Fishbowl, or Twitter or YouTube, where people write comments without using their names.

"When we push against that status quo, we recognize that the status quo will push back," they said, adding that the industry should make it so that the need for Diet Madison Avenue is irrelevant.

"Create better industry standards, get every agency to sign on to it, put money into it and enforce it."

Jesse Brody, a partner at Manatt, Phelps and Phillips in the advertising, marketing and media practice, tells Ad Age that it's not easy for someone to sue for defamation, libel or slander, especially if he or she is a limited-issue public figure such as a known name in advertising. However, Brody says a defamation suit could still be filed against the account if the facts turn out not to be true.

In the meantime, the account runs on. One female agency exec who has been leery of the site says she doesn't think anyone wants the account to be shut down, and says she knows people are rooting for it to find its way.

"That just might mean hitting reset, focusing and being even more clear about its methods and intentions," she says.

Controvery aside, says the group, "disagree with us, be annoyed with us, but talk to each other. ... The awareness it's bringing to this issue is the most important [part]."