Resource Interactive Goes 'Off the Wall' for Shopping on Facebook

NEW YORK (AdAge.com) -- The latest Facebook breakthrough is coming not from a software developer but from an agency. 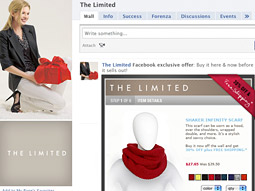 Resource Interactive, an Ohio-based digital agency with offices in Columbus and Cincinnati, this month launched "Off the Wall," a platform that allows consumers to purchase a product directly from a retailer's wall or their own feed on Facebook without leaving the popular social-networking site.

The product was developed by the agency's in-house research and development lab, which keeps the company up to speed on new developments in the digital space, while also coming up with prototypes and concepts for a "digital future."

"We needed a group of people that could take the time and have the focus to look out a little bit ahead," said Dan Shust, director-emerging media, who heads up the 18-month-old group. "We get caught up in project work occurring right now."

As marketers look to reign in costs in a tough economy, agencies have felt the squeeze, so ad shops are looking to new revenue streams from product development that have included everything from clothing to widgets to books.

Mr. Shust said he believes product development will become a bigger piece of what the agency does. He said Resource Interactive has determined it made more sense to begin building its own platforms and products that could be used by both clients and others, rather than building customized solutions from the ground up for each client or project.

Opening its products up to non-clients is proving beneficial for the agency, which is adding new clients as a result and has received some interest from international agencies looking to become the exclusive provider of Off the Wall in other countries.

Off the Wall was created when the agency, which works with major retailers such as Victoria's Secret, Burton, Hewlett-Packard and The Limited, realized the majority of activity in Facebook was taking place on the wall. "We've created engaging opportunities on sub-tabs," Mr. Shust said. "If you drive traffic to those tabs, [consumers] can have a good experience, but a lot of people don't necessary visit those pages."

Just before Christmas, The Limited became the first retailer to use Off the Wall. The retailer is offering its best-selling Infinity scarf -- which appeared on "Oprah" -- for 30% off plus free shipping. Brian Seewald, director of e-commerce at The Limited, said that sales of the scarves were meeting expectations thus far.

"We didn't attach a huge sales expectation to this," he said, though he noted that plans for future offerings using Off the Wall are already in the works. "This is more about doing something special for our fans and doing something to give our brand some visibility."

Mr. Seewald went on to explain that having launched e-commerce in September 2008 and a Facebook page in October 2009, The Limited was quite late to the online and social-media space. "It was time to show our fans that we're still an innovative company and on the edge of things," he said.

Off the Wall takes three to four weeks to implement and is relatively affordable for retailers, given its performance-based compensation model. Upfront costs are minimal, roughly covering the cost of implementation. Because Resource Interactive owns the technology, it can afford to set it up for retailers and wait for the pay off, said Mr. Shust. (Facebook does not receive any financial compensation from the e-commerce conducted through Off the Wall.) According to the company, a brand pays a nominal fee up front, while the agency shares in the revenue on the back end.

"We're pretty sure the investment to develop is going to pay off," Mr. Shust said. "Getting to a working prototype was very quick, and we did it with a few people and a small internal investment. A couple of clients in, we have reaped the benefits of that."

Why U.S. lottery creative accounts are so valuable for ad agencies