Indaba blasts ‘sweetheart transaction’ while Stagwell insists ‘deal is fair’ and ‘all we are willing to do’
READ THIS NEXT
Women are rising at agencies, but is it enough? 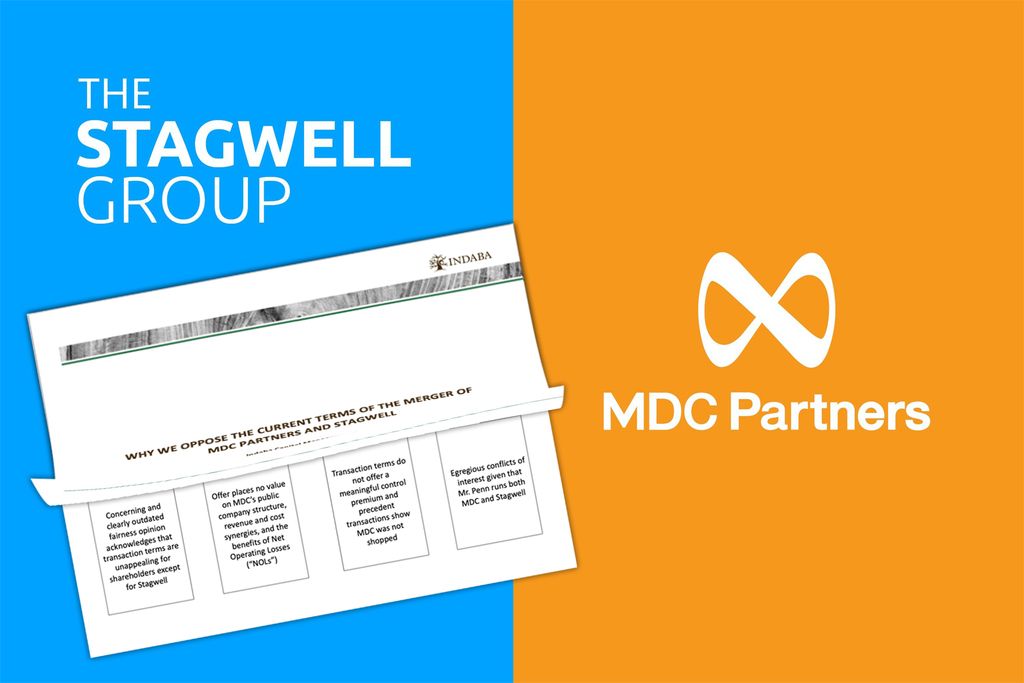 Indaba Capital Management escalated its battle with The Stagwell Group as it pushes for better terms for MDC Partners shareholders in Stagwell’s proposed merger with MDC. Stagwell, meanwhile, fired back at Indaba, one of MDC’s biggest shareholders.

Indaba late today released a feisty open letter to Mark Penn, managing partner of Stagwell and chairman-CEO of MDC, along with a slide deck detailing its opposition to current terms of the merger.

“We are not able to sit by as Stagwell tries to secure what we view as a sweetheart transaction that deprives us and other MDC shareholders of significant value,” Derek Schrier, Indaba’s managing partner, said in the letter to Penn. “Given your apparent influence over various aspects of the proposed combination of MDC and Stagwell, we want to clearly lay out our concerns for you. Unlike MDC’s [board] special committee, you seem to have the ability to address our reservations if Stagwell truly wants to combine with MDC on fair and reasonable terms.”

“Indaba continues to demonstrate a lack of analytical rigor, an understanding of the process or frankly the business combination and its financial and strategic benefits,” Stagwell Partner Jay Leveton said in the statement. “The trading price of MDC’s debt and stock are up significantly because of this transaction.

“When the deal was first announced, Indaba pointed to the stock price—then well below $3.75—to suggest the market did not like the deal. Now that the stock is above $5 per share, and investors have seen their returns quadruple thanks to this deal, Indaba is trying to point in a new direction.

“Perhaps tomorrow will bring yet another analytical innovation in desperation. The fact is that the overwhelming majority of MDC shareholders understand the valuation of these two businesses and recognize the stock price today reflects the power of the combination. We understand Indaba wants more. But this deal is fair and sensible to all reasonable parties. As importantly, it is all we are willing to do.”

In its presentation today, Indaba reiterated it could support the deal “if it included terms providing adequate value to all shareholders.”

In one of the odder twists in this merger saga, Indaba called attention to the “impressive job” of MDC management—which is led by Penn—while Stagwell noted MDC’s financial challenges.

“We believe that [MDC] management has done an impressive job navigating the pandemic and driving improvements at MDC, but this is not a justification for the Special Committee to essentially rubberstamp the anti-MDC shareholder terms,” Indaba said in its presentation. “We urge the Special Committee to reassess MDC’s value as we firmly believe that Stagwell can afford to adequately compensate shareholders.

In his statement today, Stagwell’s Leveton pointed to Stagwell’s strengths and MDC’s weaknesses as justifications for the deal's terms.

“Stagwell is concentrated in the fastest-growing areas of marketing and has an unbroken record of revenue growth from zero to nearly $1 billion along with superior cash generation and a balance sheet with little debt,” Leveton said in the statement. “MDC has required two cash infusions totaling over $200 million to stay afloat, has over $1 billion of debt and debt-like items and its revenue has shrunk every year since 2017.

“Stagwell is taking a significant risk in combining our growing businesses, which are well placed to succeed in the future, with MDC’s legacy and over-levered assets. While we would look forward to partnering with the agencies at MDC, we will not do so in a manner that undervalues Stagwell’s contributions. What Indaba is suggesting is that Stagwell should be valued materially lower on an EBITDA [earnings before interest, taxes, depreciation and amortization] basis than MDC, which is absurd given the relative strengths of our businesses.”

Under terms floated this week by Stagwell, existing MDC shareholders would own an approximately 30% stake in the merged company, according to Stagwell’s calculations, up from the 26% stake announced when MDC and Stagwell came to terms on the deal last December.

In a June 7 filing, MDC said the special committee, in consultation with its legal counsel and financial advisors, "is carefully reviewing and considering” Stagwell’s proposed new terms “to determine the course of action that it believes is in the best interests of MDC and its shareholders."

Indaba continues to argue that MDC shareholders should end up with a stake “in a range of 37.5%-40%.”

In its slide presentation, Indaba said: “We privately conveyed our concerns regarding the proposed combination with Stagwell and spent months engaging with the Special Committee and Mark Penn….

“Unfortunately, MDC appears intent on pushing through the poorly-structured merger with high pressure tactics in spite of direct feedback from its largest independent investors….”

Indaba reiterated various assertions, including allegations of “egregious conflicts of interest given that Mr. Penn runs both MDC and Stagwell.” MDC’s special committee in late May responded to Indaba’s earlier assertions, saying the committee had “negotiated with Stagwell for many months on behalf of MDC shareholders, from an arm’s length perspective, with the advice of independent financial advisors and its own lawyers.”

Indaba also questioned the independence of Stagwell’s designees to MDC’s board because “all appear to have professional overlap” with Penn. Board nominee Paul Richardson, for example, was a WPP executive in 2001 when WPP bought Penn, Schoen and Berland Associates, a firm where Penn was a principal. MDC June 7 announced, “based on input from shareholders and in anticipation of becoming a controlled company,” that MDC and Stagwell had agreed to ensure that, following the merger, a majority of the board would be independent directors as defined under Nasdaq and Securities and Exchange Commission rules.

MDC declined to comment on Indaba’s letter and presentation.