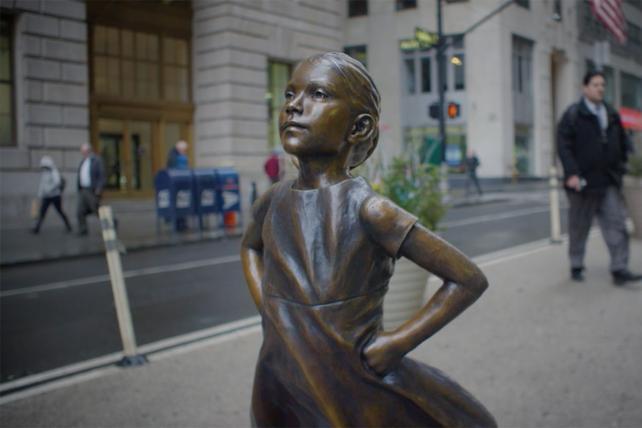 To no one's surprise, "Fearless Girl" won Best of Show for McCann New York at the One Club for Creativity's 45th annual One Show in New York City on Friday. The ceremony was hosted by actor and comedian W. Kamau Bell. The 50-inch bronze statue, cast for State Street Global Advisors, won nine Gold Pencils this year, as well as Best of Discipline for Direct Marketing and a Cultural Driver award, given for work that reverberates in the zeitgeist.

With the One Show as the last major awards fest ahead of the Cannes Lions, there's now plenty of room for speculation about what will take top prizes in France in June. Fearless Girl already competed and won Grand Prix in Cannes last year.

For the third year in a row, the One Show presented Penta Pencils, recognizing successful agency and client collaborations that have lasted at least five years. One went to BBDO New York, AMV BBDO London, Clemenger BBDO Melbourne and Impact BBDO Dubai, which work with Mars Chocolate North America-Snickers, and another went to David Miami and its long-time client Burger King.

The One Show Green Pencil for environmentally conscious work went to AMV BBDO and LADbible for "Trash Isles," created for Plastic Ocean. The work also won Best in Discipline for Social Media. BBDO New York's "The Talk" (below) for Procter & Gamble won the other Cultural Driver Award.

The Best of Discipline for Branded Entertainment went to "Beyond Money" for Banco Santander by MRM//McCann. Best of Discipline for Design went to "The Lioness Crest" for Nike by Wieden & Kennedy Amsterdam, Mindshare and New Amsterdam. "Immunity Charm" for the Ministry of Public Health, Afghanistan by McCann Worldgroup India, McCann Health, Dehli and McCann Health Global won for Health, Wellness & Pharma.

"Pedigree Selfie STIX Clip" for Mars by Colenso BBDO won Best of Discipline for Intellectual Property, as well as for Mobile. Best of Discipline in Moving Image Craft went to "Ostrich" for Samsung by MPC, MJZ and Leo Burnett Chicago. Clemenger BBDO took home Best in Discipline for Public Relations for "Give Registry," for Myer. "Green Light Run" for adidas Japan by TBWAHakuhodo and Tohokushinsha Film Corporation won in Responsive Environments.

David Miami's "Google Home of The Whopper" for Burger King won Best of Discipline for Cross-Platform, and Saatchi & Saatchi New York's "It's a Tide Ad" for Procter & Gamble won for Film.

In Interactive, "To The Last Tree Standing" for Greenpeace Poland by Ogilvy & Mather Polska took Best in Discipline, and "Burning Stores" for Burger King by David Miami did the same for Print & Outdoor. Fitzco/McCann and Casanova/McCann's "Share a Coke 1,000 Name Celebration" for Coca-Cola won for Radio. R/GA New York's "Ask For A Raise" for The Muse, Ladies Get Paid, PayScale and Reply.ai won for Social Influencer Marketing. Best in Discipline for UX/UI went to Droga5, PHD and Resn for "Did You Mean MailChimp?" for MailChimp.

The One Show recognizes the best work of the last year in more than a dozen categories. On Wednesday, comedian Chris Gethard presented an earlier batch of awards.