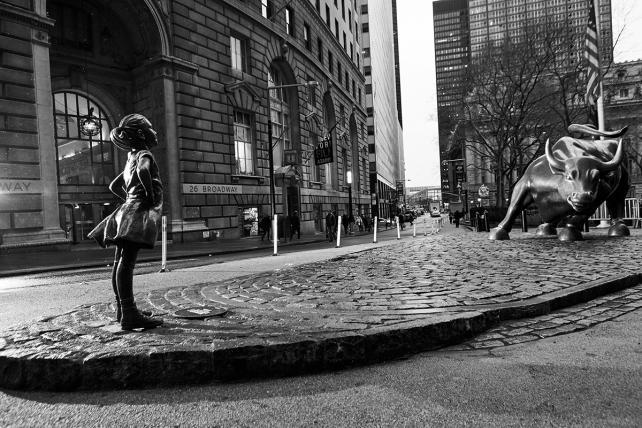 People around the world have been inspired by the small, smiling figure standing defiantly against the Wall Street machine, fists on hips, ponytail caught in a perpetual breeze. For over a year, "Fearless Girl" has been the ad industry's darling, despite a pay equity lawsuit settled last year by her creator, State Street Global Advisors.

"Fearless Girl" won big for SSGA and McCann New York at the Cannes Lions Festival of Creativity in 2017. Since then, she's snagged statues and plaques on the awards show circuit like a tiny tornado in a trailer park. The One Show, the ANDY Awards, D&AD, the Clios, the Webby Awards and Ad Age's own Creativity Awards all tossed roses at her boots.

But not only was "Fearless Girl" a creative coup, it was an effective ad. Tonight, she took home the Grand Effie—best in show—at the 2018 North American Effie Awards Gala in New York City. And with that, it's over. With no more major industry awards left for her to win, perhaps her bronzed stranglehold has come to an end.

The Effie went to "Fearless Girl" because the daily trading volume of the fund she represented climbed 384 percent in three days, according to the award committee. "The Grand Effie jury interrogated the 'Fearless Girl' entry and found that, not only was it effective for State Street's business and brand, it was effective because of its creative power," said Nick Law, chief creative officer of Publicis Groupe and president, Publicis Communications, who co-chaired the Grand Effie Jury, in a statement.

Global Effie winners with work that spanned multiple markets were also awarded at the gala. TBWAMedia Arts Lab, Apple and OMD took a Gold Effie for "The Rock X Siri," as did Johannes Leonardo and adidas for "Original Is Never Finished."