Leo Burnett Detroit Given 90-Day Termination Notice
READ THIS NEXT
Women are rising at agencies, but is it enough?
The account move followed the arrival of a new Cadillac advertising chief.
Credit: 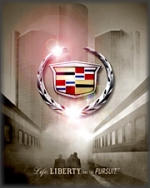 Cadillac marketing director Liz Vanzura said the new ad blitz will 'romance' the brand's crested logo to show off its iconic nature.
The move, effective Oct. 1, follows the arrival of a new ad chief at Cadillac from Hummer and cost-cutting measures at the automaker, which was dissatisfied with a Burnett-created Super Bowl commercial. Burnett and its predecessor agencies had handled Cadillac for many decades.

Began getting chunks of Cadillac
In March, GM handed Modernista, which also handles GM's Hummer account, a big chunk of Cadillac's national business without a review about a month after Liz Vanzura took over as marketing director of Cadillac from the same post at Hummer. Modernista, which has handled Hummer since 2000, at the time was awarded Cadillac's CTS sedan, SRX crossover, performance V-Series models and other unnamed cross brand projects.

"We regret [Cadillac's] decision," Jim Moore, president of Leo Burnett Detroit, told Advertising Age. "It's a major piece of business," he added, noting that the agency hasn't decided on the extent of anticipated layoffs.

Burnett retains Pontiac
Burnett will keep the national and regional dealer account for GM's Pontiac brand plus the automaker's service and parts operations with Goodwrench as its major brand. Mr. Moore said his agency still does "terrific work" for those pieces of GM's business.

The auto giant said Burnett and McCann will handle the new regional dealer accounts via the new Martin-Jay Retail Group, formed at GM's behest two months ago after a review for Buick, Pontiac and GMC's regional dealer groups. The agency is a joint venture between Martin Retail Group, Birmingham, Ala., which has a partnership with Publicis, and Interpublic's Jay Advertising, Rochester, N.Y.

Unhappy with pricey Super Bowl ad
GM was said to have been unhappy with Burnett's TV launch for the newest-generation Escalade sport utility vehicle in a 60-second fashion-show-themed commercial that broke with much fanfare during the Super Bowl this year. The glitzy spot was expensive -- Burnett rented a former airplane hangar in Los Angles to create a fashion show, complete with a 100-foot mirrored runway, name super models such as Rachel Hunter, celebrity makeup artist Kabuki and 250 extras.

"GM today is moving fast, making dramatic changes in how we run out business and offering up some beautifully designed and well-engineered cars and trucks," Mike Jackson, VP-marketing and advertising for the automaker in North America, said in a prepared statement. "We are also making some changes in how we market and advertise these products as we work to revitalize our sales and marketing strategy."