The relationship between media agencies and clients has gotten to the point that the term "agent" no longer fits, GroupM Chairman Irwin Gotlieb said at an Association of National Advertisers conference in Phoenix on Tuesday, but he's not sure what term best applies. 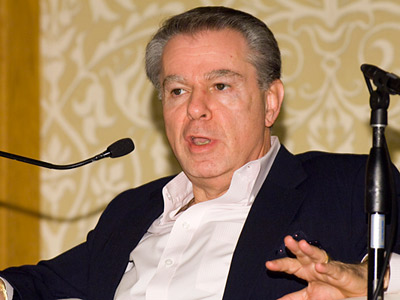 Mr. Gotlieb said the uproar over alleged U.S. media rebates prompted by his former employee, former Mediacom CEO Jon Mandel, at another ANA forum last month, has become too inflammatory. And during his own talk at the ANA Advertising Financial Management Conference in Phoenix, Mr. Gotlieb said he's been getting very few "pointed questions" from his own clients over the issue.

Both clients and agencies are under increasing pressure to deliver financial results, he said. "I think at times we've stepped on each other a little bit. We've extracted results for ourselves on the back of someone else's activity, etc. And I think we do need to get better about that," he said.

Reactions to the recent controversy have been "quite polarized," he added. "Some clients are very distrustful of their agencies. And I think there are others who acknowledge they don't understand perhaps everything they should and a little more visibility into things would be helpful. And there are others who, because they've done their homework and due diligence have a really good level of trust in their agency, because they've written an appropriate contract and ensure all parties comply."

But he said the general lack of pointed questions from his clients "says as much about the clients if not more than it says about us, because there's a level of confidence about their ability to manage an agency that suggests that they're not paranoid."

Even so, Mr. Gotlieb, a 46-year veteran of the ad industry, noted that at one time media agencies were essentially brokers for media owners, getting 15% commissions on what clients bought. He spent 22 years working for one client -- Procter & Gamble Co. -- always with the mandate from upper management to put the client's interests first, he said.

"Those relationships, rightly or wrongly, don't exist anymore," he said. Agencies are now under pressure to deliver results that are sometimes outside their control. "You cease to be an agent the moment someone puts a gun to your head and says these are the CPMs you need to deliver," he said.

In an interview later, Mr. Gotlieb said he isn't sure what the new term should be. "I'm not suggesting we need to stop calling ourselves media agencies," he said. "But the moment a client pushes you to provide certain assurances and guarantees, it affects your neutrality. It forces you to think in ways an agent doesn't think. And it evolves the relationship in a different direction. And by the way, we're grownups. We willingly accept the terms. But you can't have it both ways. Once you assume business risks, things change."

Still, he added during his talk: "When we talk to our staff, we remind them constantly that they're acting in the best interests of their clients."

Mr. Gotlieb objected to the implication that media agencies and holding companies, particularly those who are bound by Sarbanes Oxley Act (Sox) regulations, aren't meeting contractual obligations. "We're a company whose business is governed by contracts with clients," he said. "We comply and adhere to those contracts within the regulatory environment we operate in, which is Sox. … To suggest that a company that is Sox-compliant is violating its contracts, that's a pretty negative statement."

Complexity and lack of understanding are often confused with "opaqueness," he said. "Just because you don't understand it, don't assume the other guy is a crook."

For its part, he said GroupM sometimes meets with questionable behavior on the client side. "I can't tell you how many times we're asked for a disproportionate share of rebates outside the U.S.," he said, having noted that such requests come from "many of the clients in this room."

He added that, "If we give someone a disproportionate share of rebates, that means we're taking it from one of your colleagues in this room. Do you really want the business going that direction?"

Mr. Gotlieb said the controversy has prompted badly needed discussion of the issues. "We've let it go entirely too long without a dialogue," he said. "If someone doesn't understand something, let's try to get it out in the open in plain English, no bullshit."

The growing complexity of the media marketplace makes in-house media buying "not such an easy thing to do," he said. Netflix, as a tech company with a deep understanding of analytics, can do it, he added.

"It's in their DNA," he said. "If you manufacture toothpaste, tech and data are probably not in your DNA, and you don't have an aggregation of demand either way."