Group M North America CEO Rob Norman will take on the newly created role of chief digital officer for Group M Global as the WPP media agency network sets in motion a number of leadership changes aimed at its digital evolution. The changes will go into effect later this year. 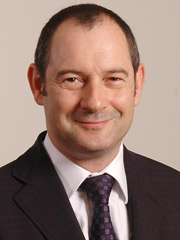 "Our activity in digital will define our future success and we are truly fortunate that Rob will step into this crucial role full time," stated Group M Global CEO Dominic Proctor, who was named Group M global president this past January. "There is nobody better suited or more experienced than Rob to lead our teams into the future."

Replacing Mr. Norman as CEO of Group M North America will be Kelly Clark, who is currently global CEO of Group M's Maxus. Vikram Sakhuja, CEO of Group M India and South Asia, will succeed Mr. Clark as global CEO of Maxus, which has had a windfall of new business over the past 12 months, including the NBC Universal and SC Johnson accounts.

For Mr. Norman, the new role won't be a foreign challenge. Prior to moving into the position of Group M North America CEO in January 2010, he ran Group M Interaction, the department that oversees the operations, data processes, talent and tools essential to the media agencies' digital tasks. At the time, Ad Age had reported that he was part of the team that worked on the 24/7 Real Media acquisition, and he had also worked to integrate the company's technologies into Group M's search and display media-buying businesses.

While Mr. Norman will revisit many of his tasks from Interaction, Mr. Proctor said in the statement that "his responsibilities will be significantly expanded in his new role." Mr. Norman will play a large role in the network's strategy with regard to technology, vendor agreements, operations and new business, among other forward-looking tasks. He'll also focus on digital measurement tools and mobile strategy.

In January, upon his move from global CEO to chairman of Group M, Irwin Gotlieb said in a statement that the network's focus would be on ensuring that "the company deploys data and technology to drive change for the benefit of Group M clients and stakeholders."

Two months later, it partnered with Nielsen on a tool aimed at better measuring the reach of TV and web campaigns, as well as the overlap of the two. Through the partnership, Group M had said it would test the offering with some clients and provide feedback on what its clients are looking for in cross-platform measurement. And last year the company launched digital audience buying unit Xaxis.