Havas Says Its Contract Template Has Nothing to Do With Rebates; Some Vendors Aren't So Sure | Ad Age
Skip to main content

Havas Says Its Contract Template Has Nothing to Do With Rebates; Some Vendors Aren't So Sure

As the debate continues about whether U.S. media agencies collect incentives to buy inventory and services from some companies over others, one template for a contract shows how each side of the table views the situation very differently.

Two ad-tech vendors, speaking on the condition that they would not be identified in order to protect their business relationships, said they received the contract template from executives at Havas Media U.S. as they neared deals with the agency.

The only problem: These vendors remain unclear on what the Havas entity in Spain actually does for those fees. The contract template says the fee will get them "Planning Services," but the vendors said Havas Media U.S. sent the contract template without any explanation of those services. No services materialized later, according to one.

For them, the arrangement fits the narrative offered by former media agency CEO Jon Mandel at an Association of National Advertisers meeting earlier this year. Citing what he described as private conversations, Mr. Mandel said U.S. media agencies were letting rebates and discounts influence their media planning and buying on behalf of marketers.

But Havas Media Group Global Managing Director Dominique Delport said that's not the case here. "It has nothing to do with rebates," Mr. Delport said during an interview with Ad Age at Havas offices in Manhattan.

HM Alliance charges only for appropriate services, he said.

HM Alliance is "one of the 150 legal entities that is in Havas" and provides services such as "digital campaign management and audience planning services and auditing, " he said.

In response to the allegation that media sellers don't receive services, Mr. Delport said: "It's not true."

Havas and the contract template may have described those services poorly, Mr. Delport said. "There is some ambiguous wording that we thank you for pointing out to us," he said. "We need to fix that. I'll give you one example. When it's about campaign management, it should be much more accurate -- digital campaign management. When it's about 'planning services' that can be quite vague; we should have written 'audience-planning services.'"

"Saying that," Mr. Delport said, "we absolutely categorically refuse to associate that draft of that template with the bigger discussion [on rebates] or any kind of interpretation. We play by the rules and this service agreement draft has nothing to do with the big topic you are [reporting on]. And we are committed to all the compliancy groups that regulate the relationship between clients, media vendor and agency. And this is what we have to say. So we are going to address that miswording issue and also explain probably more the outcomes of this kind of agreement to be sure there is absolutely no misunderstanding of what it is."

Havas didn't respond to ensuing questions, including whether Havas Media U.S. tells clients about HM Alliance's involvement in their accounts and fees.

The two ad-tech vendors remained skeptical about the contract. "None of our discussions [with Havas Media U.S.] are about best practices, data integration or any of that," an executive at one of them said. 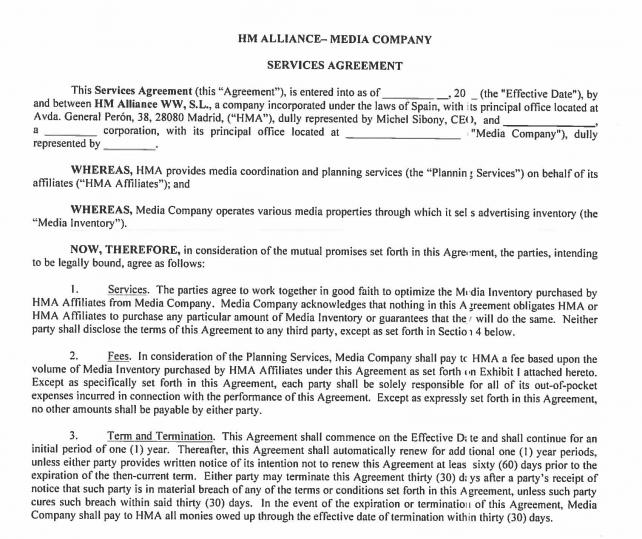 Part of a Havas-Vendor Contract Template

The debate around questionable rebates in the United States had been a steady but back-burner subject until Mr. Mandel pushed it to the fore in March, although he didn't name any names or offer evidence beyond a redacted document.

Pivotal Research Senior Analyst Brian Wieser later downgraded the agency holding companies he covers -- Interpublic, Omnicom, Publicis and WPP -- citing industry attention to the topic. "Emerging concerns among marketers around different forms of agency rebates in the United States causes us to partially (if slightly) re-assess some of our views on long-term holding company growth," he wrote in a research note. "With a drumbeat of negativity to come from marketers only now learning about the issue, we recommend investors move to sidelines or exit the sector for the time being."

More recently, Mr. Wieser and a handful of industry executives have cited rebates as a possible impetus for an unusual amount of major marketers putting their media business up for review.

The Association of National Advertisers and the 4A's said in April that they had formed a task force on media transparency.