READ THIS NEXT
Agencies of the future may be unrecognizable—that’s a good thing
Huge named Michael Koziol to succeed Aaron Shapiro, an agency co-founder, as global CEO.
Credit: Huge

After leading the agency for 13 years, Huge CEO and co-founder Aaron Shapiro is stepping down from his role in May for an undisclosed new venture, according to the agency.

Huge President of International Michael Koziol, who joined the Interpublic Group shop five years ago, will succeed Shapiro as global chief executive, effective immediately. Shapiro and Koziol were not immediately available for comment.

Koziol, co-founder of Huge's Atlanta office, will relocate to the agency's Brooklyn headquarters for the new role. The Atlanta office is the second largest in Huge's network and includes the Huge Café, a consumer-facing business that also operates as a retail innovation lab for the agency. It was not immediately clear whether someone will succeed Koziol as president of international.

"Huge is a major success story for our clients and for IPG," said Michael Roth, chairman and CEO of Interpublic Group, in a statement. "Over the last 13 years, the agency has grown from a small start-up to a 1,500 person, 12 office global organization. This trajectory is due in large part to Aaron's vision and his ability to build a forward-thinking organization. We wish Aaron the best going forward and thank him for all his contributions." 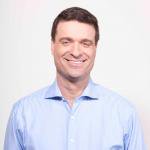 Last fall, Adweek reported that Huge went through a small staff reduction, which affected about five to 10 staffers across various U.S. offices. Huge said in a statement to Adweek that the reduction was part of the its evolution to reflect clients' changing needs and it "identified a number of roles where there is less demand for agency support."

According to someone with knowledge of the matter, Huge's LA office was absorbed in December by Elephant, a sibling IPG agency.