Former W&K and Refinery29 Execs Open Joan, a Creative Agency With Action at Its Core 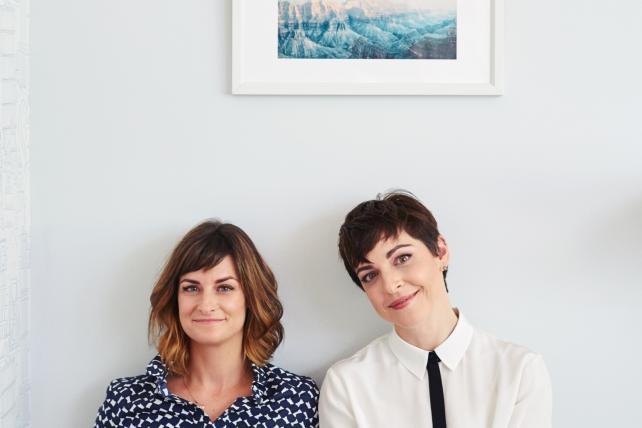 The company's moniker takes inspiration from the world's most famous Joans -- activist and musician Joan Baez, writer Joan Didion, comedian Joan Rivers, the French heroine Joan of Arc, with perhaps an extra special nod to rock star Joan Jett, who appears in a poster that hangs in the room of Ms. Robinson's daughter, a big fan.

"We wanted a name that would be bigger than all of us," said Ms. Robinson. "We started thinking about the people we admired, and throughout history, there have been some bad-assed people, who happened to be women [named Joan] and who have come to defy expectations."

(If you're wondering about that Joan famous in advertising, Ms. Holloway from "Mad Men," Ms. Robinson admits, "I only watched a few seasons, and I don't know how it ended.")

There's also a purpose behind the name, a desire to "inspire people to shape and do things they think are right," said Ms. Robinson.

Joan's founders themselves are powerful women who have impacted the industry. Ms. Robinson, who is co-founder and chief creative officer and a former Ad Age 40 Under 40, had drawn the spotlight while she was at Pereira & O'Dell, where she steered the agency's celebrated multiplatform branded content work for Intel/Dell and Intel/Toshiba, including the Emmy- and Cannes Grand Prix-winning "Beauty Inside." She then became an executive creative director at Wieden & Kennedy New York, where she helped oversee the agency's work for Delta, Southern Comfort, Equinox, Clinique and Sprite.

Co-founder and CEO Ms. Clunie was most recently the chief operating officer at popular female-focused media company Refinery29. She's also an advertising vet with four Effies under her belt and held executive and leadership roles at agencies including Saatchi & Saatchi, BBH New York, Fallon and Ogilvy & Mather. In that time she oversaw strategy and steered partnerships with clients such as Unilever, Harley Davidson, Pepsico, Brown Forman and others.

"We are going to be creating hopefully some of the most exciting and interesting stories, but we don't know how to just make the stories, but also how to make those stories move -- and move beautifully," said Ms. Robinson. "It's like content on steroids."

Ms. Robinson saw such a dynamic in stark relief with her work for Intel, a series of social film projects that wove audience interaction into the stories in real time, while Ms. Clunie gained insight into such high-speed creation in the world of publishing.

"I think, in some ways, it really helped me debunk what I think is a long-held understanding of the time it takes to make a creative idea," said Ms. Clunie. "All those lessons around iteration and listening to the marketplace are informing a lot of what we do. That said, big brand ideas still need to be made, and there's a lot of big thinking that goes into making these things."

The company opens with a client on board, General Mills, for whom Joan has done project work that has yet to debut. New staffers will be announced in the coming weeks.

The founders had crossed paths over email in the years while Ms. Clunie was still in advertising. But when the two finally sat down together, "it became clear very quickly that at least we were going to become incredible friends," said Ms. Robinson. "We have so many beliefs in common -- about how we should treat people, how to innovate, how to work with clients, the kind of work we like. It kind of became a no-brainer."

Joan aspires to live up to its name and adhere to a set of values that pays respect to its clients, its employees and broader society.

Joan will take a co-creation approach to working with brands. "One of the things that breaks my heart is when a client says to me, 'I'm not a creative but I have this idea,'" said Ms. Robinson. "They apologize before they say anything, and a lot of times they're frigging awesome ideas. No one is holding the creative conch. We all get to be creative."

In terms of its own staff, diversity is a priority: "You don't need to be a woman to work at Joan," Ms. Robinson said. "Our philosophy is that a diversity of talent is what brings unique, interesting ideas. If you have the same, you'll get the same." Every staffer will also be a shareholder in Joan. "We want everyone who works here to feel like they're really part of the company," she said.

The agency has also established the Joan Foundation of Diversity, which will ensure that a percentage of the company's time and profits will go to finding and inspiring talents from all backgrounds to join the industry. Ms. Clunie said that opposed to having a CSR tenant, "we wanted a mechanism where we could invest a portion of our profits to create meaningful change that we could measure and demonstrate to our peers. It's designed to hold us accountable and also set a new watermark for support for diversity."

The foundation is one example of how the company puts action at its core. "We can sit by and we can wait for people to make a change, or we can make a change for everybody," said Ms. Robinson.

While Ms. Robinson and Ms. Clunie have big responsibilities on the job, they're both moms with great responsibilities at home too, and the struggles of work-life balance present themselves each day. Just yesterday, for example, Ms. Clunie's daughter was supposed to graduate from preschool, but came down with strep throat. Yet such challenges present another opportunity for the agency. "Jamie and I have been talking about this, and how do we make the balance thing a policy for our business," said Ms. Clunie. "This is an example of where we should design it in. We don't really know what it looks like, but if we can figure it out, we'll do it."