Creatives You Should Know 2014: Johnny Dantonio and Mark Sarosi, Anomaly

Creators of A-B's Super Bowl Winners Avoid the Cheese
READ THIS NEXT
Cannes plans may change: Hybrid virtual and in-person event under discussion 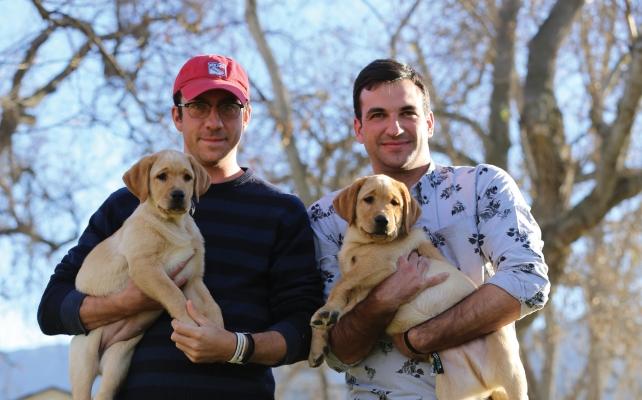 Alcohol is a tried and true method of hooking people up. In the case of Anomaly's Johnny Dantonio and Mark Sarosi, Budweiser was that special sauce that helped make them a winning team.

The two were behind the beer brand's sentimental Super Bowl winners, 2013's "Brotherhood" and this year's "Puppy Love." Before they became big game creatives, however, they were both fairly fresh at the shop and had never worked together. Mr. D'Antonio was about a year into his job as a copywriter, while Mr. Sarosi had been design director for eight months when Chief Creative Mike Byrne tasked the entire creative team to come up with Super Bowl ideas.

"Ideas were getting stabbed straight in the heart and a lot of people were getting discouraged," said Mr. Dantonio, now a CD at the agency. "Mark and I were here late one Thursday and decided to jam together. We cranked out about ten ideas and while they also got stabbed in the face, they were getting closer." In getting "closer," the pair were looking to take A-B where it had never been before.

"Looking at the legacy of Budweiser, it had never gone emotional or tried to tell a story," said Mr. Dantonio. "We thought about the idea of separation -- like when a father teaches his son how to play football, and then one day he goes off to play at Michigan State. That's a sad, proud moment so we aligned that with this rancher who raises this unbelievable creature that goes on to become a Budweiser Clydesdale. We presented it to Mike and he said, 'Man, this is either the cheesiest thing I've ever heard, or really good.'"

To guard against latter required a lot of diligence, said Mr. Dantonio. "When you're conscious of the fact that it could turn out to be cheesy, you have to be more on top of it than you usually would. We looked at probably 5,000 songs in the last few years; we were paranoid on set, in edit, in pre-pro. The main thing that came up was 'We don't want to be Disney.'"

On this year's spot, Mr. Sarosi's "paranoia" extended as far as the wardrobe of the tertiary characters and the animals' expressions. "We had so many brilliantly trained puppies and shot a bunch of reaction shots --like one where they'd put their head down on the ground with paws on their snouts -- but things like that were taking it too far," he said.

Mr. Dantonio described Mr. Sarosi as the "idea guy" who throws out ideas a mile a minute. Before advertising, Mr. Sarosi had a career in design and architecture, working with respected names like Rafael Vinoly and David Rockwell, and even took time to start his own restaurant in NYC's Chelsea Market --Ronnybrook Café -- a bricks-and-mortar spinoff of the artisanal dairy brand. Mr. Dantonio, on the other hand, is the one who gives practical shape to the ideas, a skill he honed during previous gigs as a journalist in Nashville and writing digital ads for former presidential candidate Herman Caine. "While I don't align with his political views, he did pay me a lot of money, which comes in handy when you're homeless and jobless in New York City," he said.

The two don't always work as a team and are "involved in as many brands you see under the Anomaly banner." But A-B continues to occupy a big chunk of their creative energy. The duo also created the Super Bowl social media effort that let a pup loose on a giant keyboard to post for Budweiser on Twitter and Facebook to help tease the spot in the run-up to the game. Earlier this month, they launched a cinematic baseball-themed ad for Budweiser that showed the brand's place in the sport's history and helped relaunch Bud Light in Canada with an integrated effort involving an unusual phone that brings fun and good times to a small town, depending on what's trending there.

Super Bowl 2015, too, is right around the corner, but just because they scored twice doesn't mean next year's spot is in the bag. Even on this year's ad, "we still had to fight for it," said Mr. Dantonio. "There were other ideas that were really, really good. So we'll have to go back to the drawing board again."

See the rest of the 2014 Creatives You Should Know.