Just weeks after stepping in as the new leader at McCann Worldgroup, Harris Diamond has worked out the return of a veteran creative to the agency. After a two-year absence, Joyce King Thomas is rejoining the shop to oversee a new division built around one of the shop's biggest and most-important clients, MasterCard. 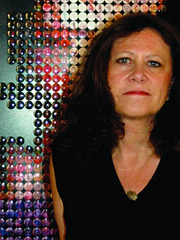 For years, Ms. King Thomas was one of the few female senior creative leaders in the business. She joined McCann as a group creative director in 1995, and was chief creative officer in McCann's New York office from 2004 until 2010, when under the agency's former chief, Nick Brien, she was ushered out as part of a massive management overhaul that led to the replacement of a slew of longtime staffers. In the interim, she joined LongReads as director of brand partnerships.

At McCann, Ms. King Thomas was the brains behind the long-running "Priceless" campaign. She co-created that iconic push after working on MasterCard advertising since the late '90s. She was also responsible for expanding the campaign to more than 100 markets around the world.

She officially begins in her new role in January, and her title will be president of XBC, a new team that 's being formed at McCann to guide work for Mastercard globally. XBC stands for "ExtraBoldCondensed," the agency said.

While the two longtime Interpublic Group of Cos. execs have been familiar with one another through their respective work at Weber Shandwick and at McCann, Mr. Diamond and Ms. King Thomas don't know each other very well and have never worked together. Discussions about her return began in earnest shortly after Mr. Brien's departure was finalized.

The creation of the new unit was spurred by a desire from MasterCard's CMO, Alfredo Gangotena, to enhance the creativity and integration of global marketing work for the brand. In a statement, he said: "MasterCard is one of the most-valuable brands in the world. With the passion of Joyce and the assemblage of talent, I am very excited about the future as we continue to build one of the most iconic brands in the world."

Although McCann XBC will be based in New York, it will guide all Interpublic shops -- including digital and experiential shops MRM and R/GA, media agency Universal McCann and sports-marketing unit Octagon -- that currently service MasterCard globally.

"Everything a global brand does should come from one distinct positioning and purpose," said Ms. King Thomas in a statement. "McCann XBC is being launched to ensure that MasterCard gets the creative work they deserve in every medium in every country in the world." The team of execs with an XBC title is small. In addition to Ms. King Thomas, XBC executives include Richard O'Leary, currently global account director for MasterCard, as managing director; and Devika Bulchandani, managing director for global strategy. The unit overall will report to Luca Lindner, president, Americas, Middle East and Africa, McCann Worldgroup.

The team model, as Ad Age has documented, has come back in style of late among agencies. WPP in particular has succeeded at netting new business by promising clients it will deliver integrated work by putting together a swat team of execs dedicated to creating advertising for their brand alone. It has more than six such teams now, for major marketers from Colgate-Palmolive to automaker Lincoln.

"When you are a client with multicountry, multicultural and multiple [marketing] disciplines, there's an argument to be made that this time of approach makes sense," Mr. Diamond said. Still, he cautioned the solution isn't right for everyone, dismissing the notion that the new XBC division for MasterCard is the same as what WPP CEO Martin Sorrell has been building for clients.

"MasterCard is getting a creative leader who speaks the brand's voice," he said, adding that it's not a unit that operates in a silo. "XBC still utilizes all the resources in McCann Worldgroup and associated agencies; it's not pulling individual people into a team, it's a coordinated community with a brand leader."