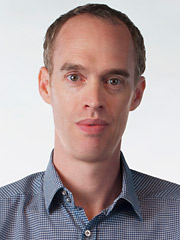 James Cooper
Mr. Cooper -- who at Saatchi worked on the well-known JCPenney "Return to the Doghouse campaign, and earlier at Dare, London and Anomaly -- will help improve the shop's digital creative chops.

Despite a months-long search, the WPP agency still lacks a chief creative officer, a post it's been trying to fill since the departure of Ty Montague, who left with Rosemarie Ryan earlier this year to hang their own shingle. Mr. Cooper will report to JWT North America CEO and Worldwide Digital Director David Eastman until a CCO is named.

In addition to Mr. Cooper's hire, the agency is making other changes in New York. It is promoting Beth Waxman-Arteta, who Ad Age earlier this year honored as a Woman to Watch. Earlier, her title was group business director on Microsoft, and now she'll serve as president-client service, a new role she's sharing with John Baker, former Iris senior interactive exec John Baker.

Mr. Baker begins at the agency Nov. 1. Most recently he oversaw Iris' Americas operation, but before that he spent time at OgilvyOne London, Organic and Modem Media.