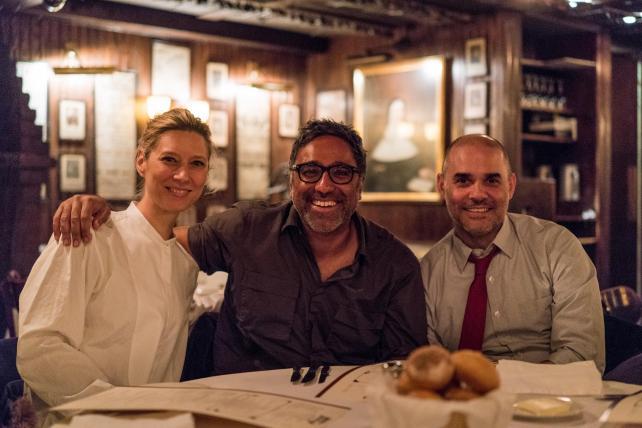 After leaving JWT in 2014 to start his own creative venture, the short-lived "Disco," he went on to work as a consultant for brands including petcare startup Bark & Co, where his role touched everything from product to marketing and branding.

But just as Mr. Benjamin was considering crossing over to client-side full-time, Mr. Graf convinced him to join his company instead. "We went out and I was honestly just giving him advice about his next step, but then something in my head was just like, 'Wait a second. Just ask him one more time,'" Mr. Graf said.

Mr. Graf had actually been pursuing Mr. Benjamin for years, and Mr. Benjamin's decision to join marks the culmination of the creative version of a classic rom-com.

The pair previously had worked together at Goodby, Silverstein & Partners for a few months, but only started to get to know each other afterwards through various industry events. "Then about six years ago when I just started, I was trying to get Jeff to come in," Mr. Graf said.

"We had this secret friendship," Mr. Benjamin said. "The first dinner was at Keens, this old-school steakhouse because no one was ever going to see us there. And sure enough, no one saw us there." As for the initial meeting, "I remember we were hanging out, and it was like one of those bad awkward dates and you don't know what to say."

Mr. Benjamin had still been at Crispin at the time and had been mulling over various opportunities, and he ultimately turned down Mr. Graf for the chief creative officer post at JWT. Since then, however, he and Mr. Graf had remained in contact and developed a real friendship while judging together at awards shows and serving on Facebook's Creative Council. Over that time, they discovered how much they clicked creatively.

"We realized how much we thought alike -- we just articulated it in different ways," Mr. Benjamin said. "My career began in the digital space. Gerry thinks in other ways that capture such great awareness, with smart work that reveals truth behind brands. What I've always admired about him is that he's never apologized for making ads. Lately, in our industry, it's almost like we're ashamed of making ads."

When Mr. Benjamin set out to start his own company, Mr. Graf opened his agency doors to him to help get things going. It was then -- and during other "conveniently"-timed visits during the agency's Thanksgiving dinner or Christmas tree lighting -- that Mr. Benjamin became charmed by the culture. "I remember feeling this when I was at Crispin -- going there was so great because there were so many ideas that had width to them. I think it's the same way with Gerry, [Chief Strategy Officer] Laura [Janness] and [CEO] Barney [Robinson]."

That helped seal the deal when Mr. Graf made his last push to bring him in. "The one thing that nagged at me for the last six years, was what if we had tried to do this," said Mr. Benjamin. "Here's this opportunity to try it again, now that we've become real friends."

With Mr. Graf's proven skills in comedy and traditional work and Mr. Benjamin's digital background, the two present an unexpected yet formidable pairing.

"The great thing about Jeff is he approaches problems completely differently," said Mr. Robinson. "From a brief, the answer could be a product or a service. His first reaction isn't, 'Here's the ad campaign.' I want that thinking applied to everything we do."

"He's going to bring incredible creative leadership," Mr. Graf said. "He's proven time and again he can get creatives to push hard and do work the didn't even think they could do."

"We're independent, and we're a creative shop, so we can do whatever we want," said Mr. Graf. "Bringing in Jeff at the top is going to open up a whole other universe of places we can go."