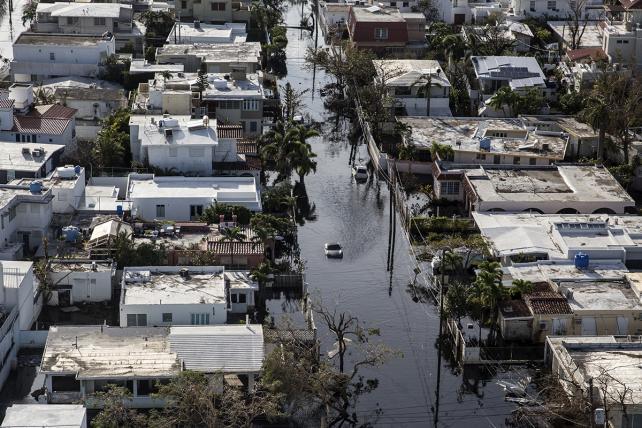 The heads of Puerto Rico's main media outlets and ad agencies met today for the first time in San Juan to figure out which media are currently able to operate on the devastated island, and what audiences they are reaching.

From now on, the group will conduct a daily inventory of available media and distribute it by email and a WhatsApp group to agencies, who will cut-and-paste the information and send it to clients, said Edgardo Rivera, CEO of DDB Puerto Rico, after the meeting held at Telemundo's San Juan offices. (Cell phone service is functioning at about 30% of its usual capacity, and Rivera was able to make a call from his iPhone outside the Telemundo building).

An unprecedented degree of cooperation between competitors is also developing. Telemundo, for instance, is letting another channel, WAPA, use its signal, he said. And agencies including DDB, which didn't suffer major hurricane damage, are offering work space to shops whose offices were flooded. The DDB office is only open for half the day, between 7 a.m. and 1 p.m., to conserve hard-to-get diesel fuel for the back-up generator. (Rivera says he can't park his car on the street, due to the risk of thieves puncturing the gas tank to steal the fuel).

Some marketers are waiting it out, and have stopped advertising products that aren't essential in the current state of emergency. In their ads, retailers are focusing on what stores are open, and during which hours. At Walmart, a DDB client, about 30 of 50 Walmart, Sam's Club and Amigo stores are open, although Walmart's home office remains closed due to water damage, Rivera said.

Telecommunications companies have switched from product advertising to messages in print and social media with the latest information about the status of cellphone service.

Package goods brands, normally major advertisers, are focusing on distribution to make sure their products are available in stores, he says.

For one client, DDB has a team following and documenting client Puma Energy's efforts to distribute fuel and diesel to try to keep essential services operating, including hospitals, insurance companies and even reporters for media outlets. "We're moving from scheduling media to PR," he says. DDB teams are also sticking with other clients, because it's the only way to reliably stay in touch with them. "Communications are so limited that we need people to be with the client, at least for the next few weeks," he says.

Some highlights from today's meeting between media and agency execs:

Radio coverage is limited, and mostly AM frequencies. Telemundo and WAPA also have limited reach. Both broadcasters' digital channels are working, but most traffic is coming from U.S. viewers outside Puerto Rico who are desperate for news of family and friends. Newspapers like El Vocero and El Nuevo Dia are publishing, but with limited circulation, mostly in the San Juan metro area.

A billboard operator reported that only about four of hundreds of digital billboards are working because Puerto Rico is almost entirely without power except for back-up generators. The company is looking at placing covers on the digital billboards so that paper posters can be put on those surfaces instead.

San Juan's airport is packed with people trying to leave the island, but there are still few commercial flights. DDB has several employees from Colombia, who left Wednesday on a military plane as the country evacuated its citizens. They'll work out of DDB Colombia in Bogota, he says.

Agencies are also looking for help from U.S. headquarters to meet payroll and get cash to employees in Puerto Rico. As cash gets scarce and some banks remain closed, lines at ATMs are growing to five hours or longer. One agency is looking into having money wired from the U.S. to an international bank in San Juan that would make up bundles of cash and deliver the money to the agency under armed guard to distribute to staffers.

On an island where electricity, phone and internet service are scarce, and supplies of many products are dwindling, plans change daily.

"The uncertainty of not knowing what will happen tomorrow is killing us," Rivera says.