How Butchering, Arm-Wrestling Skills Come In Handy on Mad Ave

Your Colleagues May Be Doing the Last Thing You Expect on Their Down Time
READ THIS NEXT
The Ad Council challenges Americans to create a more welcoming nation
Patrick Acosta
Credit:

When meeting Patrick Acosta, with his wide smile and boundless enthusiasm, his most dangerous quality appears to be his wizardry at analytics. But the 43-year-old has hunted and killed over 100 boars with knives; can butcher an animal and pack the meat in under 90 minutes; and could probably best Katniss from "The Hunger Games" in a bow-and-arrow match.

Mr. Acosta, senior VP-director of analytics at Interpublic's Mullen, has been hunting for 22 years and fishing for 40. "I bought a bow at a thrift store [in 1992] and the rest was history," said Mr. Acosta. "My wife jokes that when we started dating, I never really did a lot of hunting. Chasing women was taking up most of my time. Now that I'm married, 40% of my time is back, so I get to go hunting."

The other 60% is spent with his family and work. But work and hunting go hand-in-hand for Mr. Acosta, who eats the meat he butchers, and shares it with his family and others. "I have higher-level thinking [than animals] but their senses are off the charts compared to humans," he said. "It's similar to when we're in a new business pitch or working with clients. We all have our strengths. We're utilizing them to get a point across or help a client drive business, or whatever it may be."

Hunting has also taught him patience, which is necessary when overseeing "young thoroughbreds who want to run fast all the time," he said, referring to his staff of 20 analysts. "I have to remind them that life is more than just what happens now. They've got to look long-term, have patience and not get frustrated." In analytics, it could take quarters or years before a client sees improvement, he explained. It's the same with animals. "Once I sat in blind for 12 hours," he said. "Waiting for the next meeting is pretty simple." 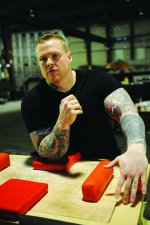 In a recent episode of AMC's new reality show "Game of Arms," cameras follow Rob Bigwood, senior interactive art director at Isobar, walking down Broadway to his office in Manhattan. The show juxtaposes footage of Mr. Bigwood, a Forest Hills, N.Y.-based arm-wrestling champion, with that of a Louisiana shrimper from a competing team. Mr. Bigwood reels as his nemesis feasts on a roast pig.

It's a scene made for reality TV, but one that the 31-year-old University of the Arts grad has grown comfortable with after a lifetime of busting stereotypes: The 230-pound vegan has prevailed in matches against 300-pound men.

"I'm naturally a nice guy. I love animals. I can't see myself eating them. I just can't do it," he said. "And when I'm good, I want to be the best. I train for hours and hours, even if I hate competing, and I do. That's why I am where I am in my career."

His interest in the sport started with his mother, who used to beat men in arm-wrestling competitions, he said. He then met a "little Italian guy" in high school who trained him for his first tournament. Since then, he's won over 60 state titles.

When he's not doing late-night workouts at the gym or pull-ups in a park near his home, he's chugging energy drinks at Isobar. He recently finished an iPad and iPhone app for Comedy Central.

Typically he doesn't bring his sport into the workplace, but he's open to arm-wrestling coworkers. "I'd let them use two arms if they wanted to."

This is the first in an occasional series of looks at agency pros with surprising sidelines. Reach out if you've got one of your own to share.