Marc Lucas Shifted Out of Chief Creative Role at KBSP

NEW YORK (AdAge.com) -- Just six months after former Razorfish creative Marc Lucas was named chief creative officer of MDC Partners-owned Kirshenbaum Bond Senecal Partners, he is being shifted out of the agency and into a holding company position. 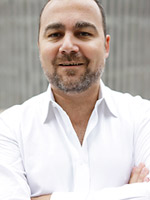 Marc Lucas
The New York-based shop is replacing Mr. Lucas -- who is said to have butted heads culturally with certain creatives there -- with a co-creative team of Izzy Debellis, executive creative director, and Edward Brojerdi, chief creative technologist.

Mr. Debellis joined Kirshenbaum a couple of years ago after clocking time at Berlin Cameron & Partners, while Mr. Brojerdi joined recently from McCann and on the heels of starting Split, a creative-technology organization within Interpublic Group of Cos. (Incidentally, he was also mentioned in the short-lived ad scandal between McCann and Kirshenbaum.)

It's a swift move for Mr. Lucas, who was brought in last December from Razorfish, New York, to add digital creative chops as part of what was touted as a reinvention of the agency. It was the first time in the New York-based agency's 22-year history that anyone other than co-founder Richard Kirshenbaum led creative. Mr. Kirshenbaum remains title of chairman.

The agency wouldn't elaborate on the reasons for the move beyond a comment from Lori Senecal, president-CEO: "This ideal partnership will allow us to deliver superior creativity, cutting-edge digital technology and a clear competitive advantage to deliver superior results for our clients."

Mr. Lucas will remain at MDC Partners, taking on the post of digital creative director for the holding company as part of a strategic resource group that includes Faris Yakob, and, until today, Alex Bogusky.

The move coincides with the news this morning that creative legend and name-on-the-door at Crispin Porter & Bogusky Alex Bogusky is exiting Toronto-based MDC and his position there as "chief creative insurgent."