NEW YORK (AdAge.com) -- In a year that has seen countless creative agency leaders make bold career moves, this one will go down as the most surprising of all. 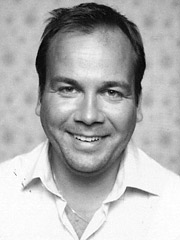 The news comes days after Ad Age sibling Creativity first reported Mr. Karlsson's exit from the shop he co-founded -- prompting the breakup of a 20-year creative partnership with Paul Malmstrom.

According to Mr. Brien, Mr. Karlsson fits the bill for what he was looking for in a new creative leader for McCann: "Someone who could lean into the future and had a big conceptual vision about how brand experience needs to be created in today's technology world."

The two admen had never met before just a couple of months ago, though their careers have taken parallel courses, both having worked in Europe, then the Midwest and now New York. "I've been a huge fan of his work at Fallon and certainly [his] success at Mother," as well as his "combination of commercial skills and an entrepreneurial skills," Mr. Brien told Ad Age. Once they did meet, he claims to have been won over by Mr. Karlsson's "hugely warm and open personality." "When I saw that, I decided Linus was the man I wanted to marry and I just had to convince him."

"We were introduced a couple of months ago and started having these really inspiring conversations, and I had this feeling inside me I really wanted to shake things up a bit," Mr. Karlsson said. "McCann is an agency that has a lot of strength, scale and can really make anything happen. I've had the best seven years at Mother, and I am so proud to have been a part of that but this seems like a natural step that I in many ways practiced my whole career for."

(Reporter's note: yes, I asked how much his salary will be, but he wouldn't say.)

You could say Mr. Karlsson has a seven-year itch. He began his ad career by joining startup Paradiset, which was soon acquired by DDB. There he and his longtime partner Mr. Malmstrom created a well-known campaign for Diesel jeans. In 1996, seven years after joining Paradiset, Messrs. Karlsson and Malmstrom moved to the U.S. to work for Fallon, Minneapolis, staying another seven years and working on accounts such as Miller Lite, Virgin Mobile, BMW and MTV. In 2003, the duo opened the doors of Mother, New York.

"Madison Avenue needs to get its swagger back," Mr. Karlsson said, decrying that the ad industry "has been on the sidelines, watching everyone else innovate." Said Mr. Brien: "We both see tremendous opportunity to reboot and transform one of the most famous brands in the advertising industry."

Mr. Karlsson's hire fills two vacancies at McCann. One was left by longtime McCann,, New York chief creative Joyce King Thomas, who stepped down earlier this year but stays on in a consulting role. The other is the chief creative officer post in the London office, which has remained empty while being run by co-Executive Creative Directors Simon Learman and Brian Fraser.

With the arrival of Mr. Karlsson, Messrs. Learman and Fraser will be on their way out. The duo has led London creatively since they were named joint executive creative directors in 2006, two years after joining the shop after working at Saatchi & Saatchi, Ogilvy.

Mr. Karlsson will be based in New York and travel to London frequently. He aims to create "one creative department with some water in the middle," and is confident there won't be a loss of immediacy by him running the London operation from the other side of the Atlantic. He pointed out it's a six-hour flight between the two hubs, and many North America chief creatives run East Coast and West Coast operations in the same manner.

Filling the chief creative post has been a priority for Mr. Brien since he took over as McCann Worldgroup's top executive in April. And for good reason. There's long been a saying in ad circles about the health of McCann that goes "As goes McCann, so goes Worldgroup, and so goes IPG."

Mr. Brien admits as much, saying that "the reinvention of the business model has to be in McCann Erickson." He notes that "when it comes to being the initial brand-building partner, a lot of those conversations start with McCann."

Although Mr. Karlsson was the ultimate hire, McCann was understood to have spoken to scores of candidates for the chief creative officer position. Among those said to have reached advanced discussions were Duncan Milner, a longtime creative at Omnicom Group's TBWA and current chief creative officer of TBWA Media Arts Lab, the unit that was built to service Apple, and Jeff Kling, who most recently was Wieden & Kennedy, Amsterdam.

For Mr. Karlsson, the 42-year old laid-back Swede who drives a pickup truck and has been used to independent agency life, taking a senior role within a giant network is sure to be culture shock. He will have to adjust to having a boss again (he'll report directly to Mr. Brien) and working not only under a holding company, but its biggest brand, responsible for the creative product in two offices that are estimated to count for 25% of McCann's revenue overall.

One thing that will be familiar are clients: Mother and McCann share ones like Coca-Cola and Johnson & Johnson.

Still, he says he's under no illusions that his jump to the new job will be easy. "This is a big job, and an unseen, unheard-of set-up." But he isn't nervous about the move. Well, except for one thing: "My fear is to write long emails. I'm not very good at that."