Headlines today have been dominated by the outrage and public show of support for the family of Trayvon Martin, a 17-year-old Florida high-school student who was shot and killed by a self-appointed neighborhood-watch captain, George Zimmerman . 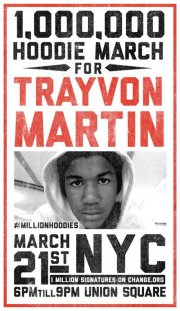 President Barack Obama today called the killing a tragedy, saying that "if I had a son, he would look like Trayvon," and NBA star LeBron James is calling for justice to be served.

It turns out that a young ad man, 24-year-old Daniel Maree, a digital strategist at Interpublic Group of Cos.' McCann, was behind the organization of a march in New York City -- and social-media campaign -- that has garnered a lot of attention.

Raised in South Africa, Mr. Maree attended college in the U.S. and worked for the World Bank before joining McCann. His desire to raise awareness of Mr. Martin's murder stems from personal experiences in which he felt targeted merely for walking down the street wearing a hoodie.

In a note that McCann North America President Hank Summy sent out late last night to staffers to inform them of their co-worker's efforts, he explained Mr. Maree's involvement:

Daniel decided to start a petition on Facebook, linked to Change.org, asking for a million signatures to encourage police action in the case. Out of that , a viral campaign grew quickly, and people around the world began uploading a picture of themselves wearing hoodies, many of them asking the question, "Do I look suspicious?"

As the campaign viralized, a group of Daniel's friends, including Kandace Hudspeth, Director of McCann Social Central, and Daniel's Social Central colleagues, used their free time and their skills to support Daniel, and build a campaign focused on the rally at Union Square last night. The team, experts in all areas of social -- brand storytelling, content strategy and simplification, event activation, PR, creative and technology -- created the Twitter hashtag #millionhoodies to spread the word, and also a gorgeous poster that was distributed online and printed for the rally as well. After Trayvon Martin's parents announced they would come to NY and speak at the 6 p.m. rally on Union Square, media attention poured in.

Yesterday's rally attracted a peaceful, passionate and diverse crowd estimated at about 5,000 people. After Travyon Martin's parents and other community leaders spoke, the crowd marched from Union Square west on 14th Street , then north on Sixth Avenue, and was covered by media every step of the way.

If that isn't enough, the Facebook petition surpassed 1 million signatures early this morning and is still growing by thousands of names every hour. In fact, ABC World News is reporting that the petition has become "The fastest growing petition in the history of the internet."

This is an extraordinary story and a brilliant example of how one person's idea, combined with the power of social media, and built by collaboration, can change the world. Congratulations to Daniel Maree and everyone else on the Social Central team – Kandace, Sharon Panelo, Michael Nguyen and Tiphaine Murat.