Boutique Agencies Nip at Heels of Established Powerhouses, and a Nontraditional Shop Is by Far the City's Largest
READ THIS NEXT
Uncomfortable Conversations: YML's Ashish Toshniwal on making Silicon Valley more inclusive

MINNEAPOLIS (AdAge.com) -- If you haven't visited the creative-advertising hamlet of Minneapolis in recent years, you might not recognize it.

The powerhouses Fallon, Martin Williams, Campbell Mithun and Carmichael Lynch are still there, but some are dramatically smaller. Boutiques run by their former executives now work on brands such as Apple, Nordstrom, General Mills and Target. The city's largest agency works primarily outside of traditional media, skipping TV altogether. And a handful of younger shops with names such as Periscope and Olson that combine digital specialties with quirky offerings in design, packaging and even "social anthropology" are on the verge of lapping long-established, holding-company-backed agency brands in revenue.

"If it isn't completely reordered, it's close," said Howard Liszt, a former CEO of Campbell Mithun who teaches advertising at the University of Minnesota's business school.

"The energy and momentum here is no longer with the agencies it used to be with," said Michael Hart, a former Fallon copywriter who co-founded Mono, a 32-person boutique based in the city's Uptown neighborhood that does digital work for General Mills and in-store work for Apple, among other brands. "Clients are gravitating toward agencies that attack the model in different ways, and you can see that playing out in how things have shifted."

For evidence, look no further than Mr. Hart's former employer, which for decades was the city's creative standard bearer. Fallon has cycled through eight creative leaders since 2004, and its revenue fell to $41.6 million last year from $82.2 million in 2003. Fallon has dropped to No. 5 from No. 3 in the market.

The agency recently moved from a larger corporate space into a dazzling downtown expanse full of dramatic conference rooms, photographic evidence of its iconic creative past and even hardwood floors built from local timber, and has lately flashed some signs of stability. It won six accounts -- including Boston Market and Abu Dhabi Bank -- in the second half of last year and just recently won Charter Communications, but the road back to being viewed among the nation's creative elite looks steep. "We want to be [Ad Age's] Agency of the Year within three years," said Fallon CEO Chris Foster, who came to the agency from Saatchi & Saatchi just over a year ago.

Getting on the map
Campbell Mithun, the market's biggest creative agency, which works on General Mills, hasn't fared much better: Its revenue fell 23% in five years. The agency suffered a tough break late last year when it won a hard-fought pitch for National City Bank only to see the Treasury Department force the bank into a merger with PNC. And it was dealt a second blow earlier this month, when longtime client H&R Block jumped to DDB without a review.

Fallon and Campbell Mithun may have put the Minneapolis scene on the map, but they no longer define it. Carlson Marketing, a marketing-services behemoth based out of an airplane-hanger-turned-QVC-soundstage on the city's outskirts, has long been the biggest shop in town, and that gap has only grown wider. A pioneer in loyalty programs -- its parent company owns the Radisson hotel brand -- Carlson has annual revenue of $265 million, nearly four times that of the next-largest Minneapolis shop, and also more than some large ad networks based elsewhere, such as Ogilvy & Mather and Leo Burnett.

The source of that growth has been marketers' increasing demand to talk one-on-one with consumers. A 200-person creative team and an army of 55 Ph.D.s use databases and data-analytics capabilities that were the bedrock of stodgy frequent-flier programs to practice what CEO Jeff Balagna calls "Loyalty 2.0," a means of chatting with consumers individually through digital, mobile and direct mail and supplementing those offerings with print media, out of home and event-marketing services.

That's helped the company branch out from its traditional base of airlines (Northwest, Delta), hotels (Radisson) and rental-car companies (Avis) into fields such as beverages and package goods. Two newer clients are Coca-Cola and Procter & Gamble. "A lot of dollars for traditional media are shifting to what some people call below the line," Mr. Balagna said. "But the truth is there is no line anymore, and we're in the sweet spot."

While no other agency in Minneapolis has anything resembling Carlson's scale, the market is rife with nontraditional agency models that have begun to win over national brands. Zeus Jones, a 13-person start-up founded by former Fallon executives, is helping Nordstrom and General Mills navigate the possibilities of one-to-one marketing and social media from a cluttered, claustrophobic, two-room office that shares a hallway with a Walgreen's pharmacy. Another agency that's fallen out of Fallon is boutique Barrie D'Rozario Murphy, which took the agency's United Airlines account when it left. The 25-person shop has since hauled in work for Chase and Best Buy.

The box and out-of-the-box
Out-of-the-box thinking is also being done in places such as Olson. The 180-person shop specializing in digital, for example, used a team of eight "social anthropologists" from places such as the London School of Economics to help Nike Bauer Hockey shake its perception as an older brand in a space dominated by youth. Olson mined hockey culture for insights into players' language and aspirations -- noting that youth hockey players are more influenced by older youth players than by the professional endorsers Nike typically employed. It also revamped the online retail experience. Bauer climbed to No. 1 from No. 3 in the category and has since been sold by Nike, which retained Olson to work on its Converse brand.

Then there's Periscope, formed by the 1994 merger of a creative agency and a printing company. The agency's mantra of "insourcing" everything from digital production and photography to package design ("we design the box and we design the design on the box," said VP-Creative Director Charlie Callahan) has helped it win over national brands such as Cox Communications, Papa Murphy's Pizza and Target.

A trek through the sprawling, cluttered midrise office reveals areas dedicated to prepress work and package design, a photo-shoot studio set up like a Food Network kitchen, and areas for traditional marketing and creative services.

"It's a fabulous model because it adds a lot of efficiency," said search consultant Jane Bedford of Atlanta-based Bedford Group. "It really appeals to certain clients." Apparently: Revenue grew 40% last year, to $46 million, surpassing Fallon's and bringing Periscope within $1 million of Carmichael Lynch.

Carmichael Lynch has been the best performer among the market's traditional Big Four agencies (Martin Williams, Fallon and Campbell Mithun are the others), in part because it's borrowing from the integrated-marketing playbook of some of its upstart neighbors. (The shop recently moved into a warehouse-district space formerly occupied by Prince and had to remove his purple carpeting.)

National attention
Carmichael Lynch is best known for its work on Harley-Davidson and, more recently, Subaru. But it recently restructured to make public relations and digital more central to its offering, a move that seems to be paying off. It bested hotshop R/GA in a pitch for Subaru's digital work last year, and it recently won separate public-relations and creative pitches for cookery marketer Calphalon.

That approach is beginning to draw notice elsewhere: Four Minneapolis shops, including Carmichael Lynch, took home Effie Awards in New York earlier this month. Olson and another local shop, Colle & McVoy -- a former agriculture specialist that recently moved to the warehouse district and reinvented itself as a creative boutique with specialties in digital, design and public relations -- won two apiece.

Still, there's not an explosion of business coming to the market just yet. Russel Wohlwerth of search consultancy Ark Advisors said despite clear evidence of a creative renaissance in Minneapolis, some coastal clients aren't interested in hiring an agency they've never heard of in a city they've never been to, particularly at a time they're trying to contain travel costs and are worried about time-zone differences putting additional strain on thinner marketing departments.

"It can be hard to sell it to clients," he said. "But there's definitely something going on there." 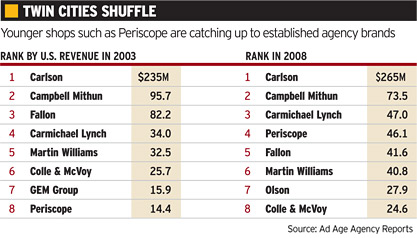