Ogilvy & Mather, Chicago, has recruited a Wieden & Kennedy executive to be its new president. 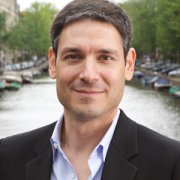 Lee Newman comes to the WPP agency from the Amsterdam office of Wieden & Kennedy, where he was managing director and oversaw the agency's work for Heineken, Nike and Coca-Cola, among others.

He started his career at Leo Burnett, where he spent six years and worked on Procter & Gamble and Disney, and later worked at Fallon , working on BMW and Lee Jeans. He also worked at McKinney on Audi and Lands' End.

Mr. Newman is in the process of relocating, and when he officially steps into the post in April, he'll become one of a slew of senior execs from European agencies that the Chicago market has managed to attract in the past couple of years. In 2010, Ewan Paterson joined DDB to lead the shop's creative, moving from London's Clemmow Hornby Inge & Partners. Mr. Paterson recruited other CHI alums in London, Matt Collier and Wayne Robinson, to Chicago.

Historically, many Chicago agencies have bristled at the notion of reaching outside the confines of the city, especially for senior positions, but shops seem increasingly open to doing so. In the past couple of years, Susan Credle was recruited to Leo Burnett after a long career at BBDO , New York, and Peter McGuinness was enticed to DDB, Chicago, from Gotham in New York.

Mr. Newman says part of the draw for him was having an integrated offering under one roof. "I've never had an opportunity to work for an agency that has such a comprehensive suite of services," he told Ad Age .

For Ogilvy, the hire means that Jack Rooney, Ogilvy Chicago's president, will become chairman-CEO. He'll oversees the global SC Johnson business, which the agency won in July after a massive review and is splitting with Omnicom's Energy BBDO . Ogilvy had been working on SC Johnson through its OgilvyAction unit before the review.

"Lee is somebody whose background is perfectly suited to us, in that he's worked in agencies that put a strong premium on creativity," said Mr. Rooney. "Most importantly, he is someone who knows how to run a large agency, so he is a kindred spirit with the right kind of experience."