Combination Will Require Navigation of Potential Antitrust Issues, Divergent Strategies
READ THIS NEXT
The Kraken rum hires Eleven as AOR after ‘creative sprint’

UPDATED WITH NEW INFORMATION: Publicis Groupe has called a press conference with journalists for 8AM EST on Sunday morning. After days of speculation about a merger with Omnicom Group -- which was widely seen by analysts and agency execs as unlikely to materialize -- it's now believed that Publicis CEO Maurice Levy will announce a proposed merger to create the largest ad holding company in the business.

Bloomberg News is reporting that Publicis Groupe and Omnicom Group are "in late-stage talks about a combination." The report, which came after today's market close, cites a single source defined as "a person familiar with the negotiations." Neither company could be reached for comment.

This is not the first time such speculation has arisen -- talk of Publicis merging with a rival crops up on a yearly basis. Last summer's rumor was that the agency would combine with Interpublic Group of Cos.

Brian Wieser, analyst with Pivotal Research Group, is skeptical of an Omnicom-Publicis combination. "Our view is that such a transaction is unlikely to occur," he said. "However, we would consider a combination of the entities as highly favorable for the companies and the industry if they, in fact, decided to merge and regulatory authorities approved a deal."

A pairing of the two would create adland's biggest behemoth. A merger of Omnicom Group (market cap: $16.8 billion) and Publicis Groupe ($15.6 billion) historically would be the biggest agency deal, eclipsing Dentsu Inc.'s $4.9 billion acquisition of Aegis Group in March 2013 and WPP's $4.7 billion purchase of Young & Rubicam in 2000.

Beyond requiring an eye-popping price tag, a deal would mark a stark change in strategy for each company. Publicis Chairman-CEO Maurice Levy has put the French firm's focus on fast-growing emerging markets and gone on a digital buying spree, acquiring Digitas, Razorfish, Rosetta, Big Fuel and LBi since 2006. Omnicom generates more than half of its business in the U.S., and President-CEO John Wren has resisted getting into the digital arms race because of the hefty premiums assets are commanding.

It's unclear how a deal would be structured and who would be left in charge. Mr. Levy, 71, has been chairman of the Publicis management board since 1987. Mr. Wren, age 60 at the time of Omnicom's April 2013 proxy statement, has been president-CEO since January 1997. He was part of the original management team that created Omnicom in 1986 through the merger of BBDO, Doyle Dane Bernbach and Mr. Wren's agency, Needham Harper.

The deal talk comes amid a surging stock market that has sent agency shares climbing. Omnicom shares this month reached a historic high and are up roughly 30% on the year; Publicis stock, up 31% year to date, this month traded at its highest level since 2000.

In a note issued after the Bloomberg story appeared, Mr. Wieser cited potential antitrust issues in the U.S., noting the two firms' combined U.S. revenue was $11 billion, twice that of the nearest competitor, WPP. Ad Age DataCenter estimates total 2012 U.S. agency revenue at $35.6 billion based on the sum of estimated revenue of nearly 1,000 agencies analyzed in Agency Report 2013. 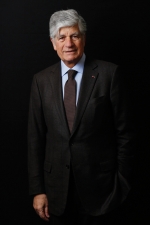 Mr. Wieser also noted that "the degree of control by an American company (even if nominally a merger of equals) over a French one might be another issue, as Publicis is one of the most important multinational companies based in France, a country famously known for protecting national champions."

Omnicom last year generated $7.4 billion of revenue in the U.S. (or 51.8% of its worldwide revenue), far ahead of WPP, the second-largest player in the U.S. based on revenue. Publicis reported $4 billion in 2012 revenue from North America; the company did not break out U.S. revenue in its annual regulatory filing.

A tie-up of Omnicom and Publicis could put pressure on other agency companies -- such as No. 4 Interpublic Group of Cos., No. 6 Havas and No. 9 MDC Partners -- to consider merger partners in a rapidly consolidating field.

Omnicom and Publicis both already are on the roster of such clients as McDonald's Corp., Mars Inc. and Procter & Gamble Co.

But a merger between the two holding companies could present challenges on the soda front, one of the most conflict-wary categories: Omnicom has deep ties to PepsiCo while Publicis agencies work for Coca-Cola Co.

Still, overall conflicts resulting from a merger probably would not be as big an issue today as they would have been a few decades ago. That's because agency companies have become more adept at managing rival clients, and marketers have become more comfortable living under the same agency company as long as account firewalls are in place.