Blaming spending cuts from major consumer packaged-goods marketers who provide 30% of its revenue, the world's largest holding company, WPP, slashed its full-year forecast today to miniscule growth of zero to 1%. 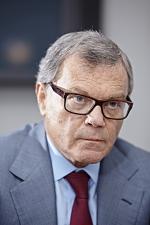 The picture is especially grim in North America, where like-for-like net sales fell by 3.3% in the second quarter, and by 2.2% in the first half of 2017. North America accounts for 38% of WPP's business.

In a call with U.S. analysts, CEO Martin Sorrell cited a "trifecta of digital disruption, zero-based budgeting and active investors" that is pressuring ad spending from major consumer packaged-goods marketers in particular.

"Fast-moving consumer goods has taken the brunt of the cuts and cutbacks both in media spending and agency spending," Sorrell said. Among WPP's top 30 clients, 14 saw a drop in net sales of about 2.5% in the first half of 2017, he said.

WPP's two biggest CPG clients – Procter & Gamble and Unilever – are in major agency cost-cutting drives. P&G in April outlined a plan to cut $2 billion in marketing costs over the next five years, around $500 million of that from agency fees and production. That comes on top of $600 million in cuts over the past three years. Unilever has slashed the number of ads it produces globally by 30% while halving the number of agencies it works with. Lever has also taken more of its production in-house to U Studio and U Entertainment, eliminating work often handled by WPP and other holding-company units.

Until now, WPP was forecasting 2% like-for-like net sales growth for the full year 2017.

"We're trying to wrestle with … why our budgets and forecasts, which seemed quite reasonable, were so wobbly in Q2," he said. "We're a little once bitten, twice shy." He noted that after some big client losses like AT&T in late 2016 and Volkswagen in early 2017, new business has come in that should start having an affect later in the year.

"I'd be a little more optimistic about 2018 than 2017," Sorrell said. "I don't see how little or no volume growth in packaged-goods can work. There's incontrovertible evidence that companies that invest in innovation and branding that innovation get greater growth."

Analysts and consultants also have some ideas about where WPP's problems lie. "Growth for agencies by and large comes from four growth levers: net new business, organic growth from existing clients, acquired businesses, and financial optimization," said Simon Francis, CEO of Flock Associates. "A holding company can balance across these four levers of growth. If two are missing, but two are strong, you may still get growth. But if three levers are off, then you don't grow. It would appear from the outside that WPP has three levers 'off'."

Francis noted WPP has lost some big pitches and assignments, and that important clients—including Ford Motor Co. as well as the packaged-goods giants -- have cut investment. He also thinks growth may be slowing because the holding company is making fewer acquisitions and speculated that "maybe some of the work clients have done on media rebates, kickbacks, etc … has reduced some income."

Previously strong markets are also presenting challenges. "WPP is facing a 'perfect storm' this year of flattening business in China and Brazil which have been strengths in the past; their CPG clients sharing some of their own struggles with them; and an internet hack to boot," said Greg Paull, a principal at R3. "Getting the share price back up is going to require its own zero-based budgeting approach for the year ahead--something easy to say and hard to do. They have a bigger challenge because of developing market and CPG exposure."

And it's not just WPP's problem. Brian Wieser, senior research analyst at Pivotal Research Group, said "the thematic elements WPP is talking about are already of concern to every holding company and have probably depressed everyone's' results."

Other takeaways from Sorrell's call with analysts:

-- Consulting companies and the Facebook/Google duopoly "aren't eating WPP's lunch." Apparently he gets asked that a lot. Dismissing the likes of Accenture, Deloitte and so on as serious competitors for the moment, he said consultancies are mostly making a number of purchases on a fragmented basis of small digital agencies. Their bigger impact right now, he said, is clients hiring consultancies to analyze costs.

-- It takes a lot to impress Martin Sorrell, but a two week-trip to China last month that he mentioned more than once on the call clearly did. "Tencent and Alibaba changed the China marketplace and are starting to go beyond the shores of China," he said. He also mentioned visiting Huawei, a Chinese marketer that he said has 50,000 people working on its campus, and Alibaba, with 15,000 staffers at its China headquarters.