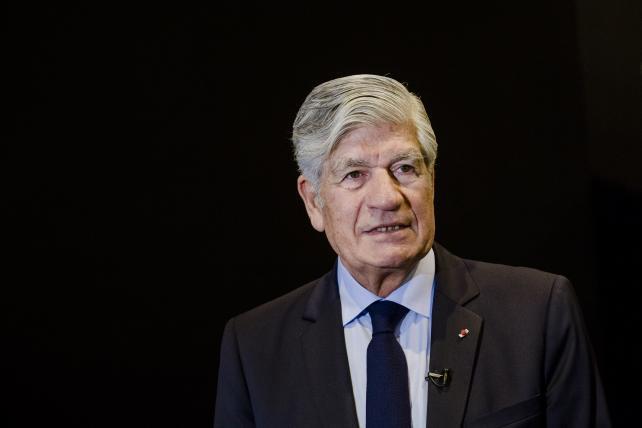 Maurice Levy, chairman and CEO of Publicis Groupe, speaks during an interview at Viva Technology conference in Paris in June.
Credit: Marlene Awaad/Bloomberg

Publicis Groupe Chairman-CEO Maurice Lévy suggested that he will continue to have an active role at the French communications giant after he steps down from his current role next May.

"I will support everything," Mr. Lévy told analysts during Publicis Groupe's 2016 third quarter results presentation on Thursday. "I will do whatever it is [the board] would like me to do except running the company. At a Goldman Sachs conference I said as a joke I would be happy to be a doorman, because the uniform is nice and you see a lot of people. This means that if I have to open some doors for the team and if I have to work with some clients to help the transition, this is something I will do very gladly."

The new leadership will be announced by February next year, and in place by May. "We are privileging an internal solution," Mr. Lévy confirmed, but hinted that there may not be one individual successor to his role. "It's disrespectful to mention the idea of what the future organization might be," he said.

Arthur Sadoun, who last December became CEO of the new Publicis Communications division housing all the group's creative networks, is considered the person most likely to lead Publicis Groupe after Mr. Lévy steps down.

Before he goes, Mr. Lévy is expected to finish a restructuring of Publicis Groupe by streamlining digital operations. The Publicis Group portfolio includes digitally focused agencies such as Razorfish, SapientNitro and DigitasLBI; creative specialists such as Publicis Worldwide, Leo Burnett, Saatchi & Saatchi and Bartle Bogle Hegarty; and media operations such as StarcomMediaVest and Zenithoptimedia.

Mr. Lévy said there will be an announcement concerning Razorfish's "interesting positioning" in "two or three weeks or maybe a little bit later."

Appearing to hint that Razorfish might become part of SapientNitro, he said, "Razorfish has changed dramatically, and its positioning is no longer what we call a digital agency. It is all about experience. They are working extremely closely with SapientNitro and they are also embedded in a lot of pitches that the other operations are doing. We have ... Sapient Nitro and Razorfish with a very close approach. Digitas is positioned in a different box."

The third and fourth quarters will be the hardest hit by the media losses of 2015 -- including Procter & Gamble, Coca-Cola, and Walmart -- but the group expects to see the positive impact of recent wins from Walmart, GSK, Procter & Gamble's Coty and USAA in 2017.

Mr. Lévy blamed poor U.S. figures on the long-term fallout from 2015 "mediapalooza" losses, and also on the uncertainty around the presidential election. He said that Donald Trump is a "business person who is a bit disturbing to a lot of people" and that Hillary Clinton is "not much liked either."

But Mr. Lévy predicted that things would "calm down" as soon as a president has been elected. "I'm pretty sure that whoever is elected there will be a great team ... As Henry Kissinger put it -- it suffices to have five good men [or women] to run this big country. I guess that in the U.S. it will not be difficult to find five good men or women."