Want an iPad From Your Co-workers? YouEarnedIt! | Ad Age
Skip to main content

Want an iPad From Your Co-workers? YouEarnedIt!

Loyalty programs are ubiquitous for retailers hoping to motivate customers, but digital agency Rockfish Interactive is applying the concept to staff with a peer-to-peer digital-reward program it's created: YouEarnedIt.

The concept is simple: Each month, employees get points they can reward to their co-workers. They can accumulate and redeem those points for what they want from an online catalog that includes everything from gift cards to iPads to lavish vacations, customizable by company. Employers track who's getting the most points, which they may use to help inform employee reviews or get a sense of how individuals or departments work together. 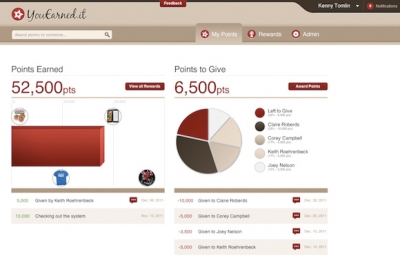 YouEarnedIt is based on a points system.

Launched as part of the Rockfish Labs incubator and now in the process of spinning off as a separate company, YouEarnedIt has been licensed to a handful of firms unaffiliated with the WPP agency. Those include social sho-per-marketing firm Collective Bias, Rogers, Ark.; digital shop IQ Agency, Atlanta; and Mass Relevance, an Austin-based curation platform that resyndicates Twitter content. Rockfish CEO Kenny Tomlin said WPP siblings Y&R, JWT and 24/7 recently signed on to roll out the system, too. Client Walmart is also piloting a test .

While no one is likely to stay on the job just for the points, YouEarnedIt does provide a way to spread the love and recognition, particularly to departments that may not always be the stars in a company, Mr. Tomlin said. He's also considering adding a "client portal" next year that would let client executives award points to agency employees.

Mass Relevance CEO Sam Decker implemented YouEarnedIt six months ago because it jibes with a core value at his firm -- "freesponsibility," or the democratization of responsibility. He said he's tried other awards and incentives, but after six months of YouEarnedIt, likes it better.

"My director of product management walked out on Friday holding an Apple TV over his head and said, "Thanks, everybody,'" he said. "So people can see it and it becomes tangible."

She likes the social aspect of the system, set up with a news feed for the 40-employee shop so others can chime in when someone gets or gives points. "Not a day goes by where there isn't activity," Ms. Callahan said.

Neither Mass Relevance nor Collective Bias have seen any signs of employees gaming the system to reward one another unjustifiably.

"No one has experienced that yet," Mr. Tomlin said. "Also, almost all the companies on the system have their recognition feeds set to public, so all their co-workers would see what had just occurred."

~ ~ ~
CORRECTION: An earlier version of the story incorrectly said Ogilvy & Mather is rolling out YouEarnedIt.