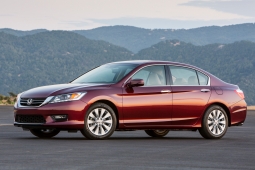 It was a fast-moving process for what was the most closely watched review of the past year. For one thing, it's the biggest account the industry has seen go up for grabs in some time. Honda spent a total of $1.14 billion on U.S. advertising in 2011, according to the Ad Age DataCenter . And being a car, it's a plum account that just about any agency would want to have on its roster.

There's been an emotional component, too, as the outcome would weigh heavily on the fate of its incumbent of 27 years, RPA.

The review began in December, and Honda tapped search consultancy Roth Associates to manage the process. RPA was invited to defend both creative and media duties, according to people familiar with the pitch.

For RPA, the change is not fatal. But it will surely trim down an agency with so much invested in the account. The shop took on the Honda brand business when it opened its doors in 1986; in 1999 Honda consolidated its Acura media and creative business there as well. Founders Gerry Rubin and Larry Postaer launched the firm out of what was Honda's agency group within Needham, Los Angeles, after Needham Harper & Steers merged with Omnicom. Since its inception, the firm has added a handful of accounts, including Farmer's Insurance and La-Z-Boy. But executives familiar with the matter have said that the Honda account still accounts for more than 50% of the agency's business.

For Mullen, picking up the Acura brand is a huge opportunity to help the Interpublic shop continue its trajectory from an East coast mainstay to a formidable national agency. The shop, which was on Ad Age 's A-List in 2013 representing the best ad agencies in the country, has been on a new business tear of late. Other clients it added this year include Coca-Cola's Honest Tea, American Greetings and SquareTrade.

For MediaVest the win means that media agency network Starcom Mediavest Group is getting back into the automotive game only a year after Chicago-based Starcom lost its multi-billion-dollar General Motors business to Aegis' Carat.

Honda had been running a concurrent pitch for dealer business, and in December MediaVest also won the media-buying and planning business for a group of Honda dealers in New York's tristate area. Publicis Kaplan Thaler picked up the creative portion of that pitch.

For SMG, it's a sizeable addition; in 2012 the auto giant spent $850 million on measured media in the U.S. across both brands, according to Kantar Media, up considerably over the prior year from just over $700 million.

At the beginning of the Honda review, Michael Accavitti, Honda's VP-national marketing operations, told Ad Age that "In the face of a changing media landscape and a hyper-competitive marketplace, our challenge is to create dynamic marketing campaigns that connect and engage consumers with our products and our brands. The review we have initiated will lead to a strong, long-term strategic plan for our brands."

That plan will unfold over the next several months.