Group Singles Out Droga5 With Petition, Ads, Social Media
READ THIS NEXT
Petco adopts Droga5 as its new creative agency

Contract negotiations between the ad industry and the Screen Actors Guild-American Federation of Television and Radio Artists are set to begin in February, but SAG-AFTRA is already making noise.

The union last week launched a paid media campaign targeting Droga5, buying sponsored posts and tweets on Instagram and Twitter, and also bought ad space on sites including Ad Age, Adweek, Variety and the Hollywood Reporter calling out the agency. "Actors Wanted," it read. "Must be cool with unfair pay, no benefits, exploitation. Contact Droga5 if interested." 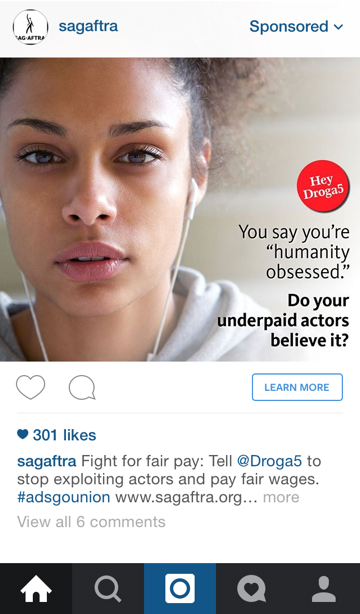 The group also said it would have some of its members deliver a petition to Droga5's headquarters asking the shop to "stop undermining the industry standards that ensure commercial performers can earn a middle-class living." SAG said the petition had 8,000 signatures.

A few of the petitioners tweeted their journey to Droga5's building and their experience with security. They were not allowed up to Droga5's offices, which shares a building with a number of other tenants in lower Manhattan. "SAG-AFTRA members simply went to drop off 8,000 petition names and talk with Droga5 today," said SAG-AFTRA New York Local President Mike Hodge, who led the event. "Instead of coming downstairs and looking us in the eye, Droga5 wouldn't accept the petition and the police were called. Today's action shows Droga5 we're not going away quietly and reminds them that treating hard-working performers in an equitable fashion and allowing them to earn a middle-class living is the right thing to do."

"SAG-AFTRA did not contact any individuals directly at Droga5 to deliver the petition," said the agency in a statement. "They were asked to leave the building by police, who were called by the building's management after they refused to leave the property when requested."

Droga5, interestingly, has investment from another Hollywood stalwart: William Morris Endeavor, which bought a 49% stake in the agency in 2013.

SAG-AFTRA began this campaign this fall, singling out Droga5. The union hasn't said yet whether it plans to call out other agencies, or what the next approach is, but it's clear it's trying to bring more non-union agencies into its fold with the next three-year contract.

SAG-AFTRA is alleging that Droga5 shoots non-union work with union performers, paying them non-union wages. Droga5 is not a SAG-AFTRA signatory and therefore has freedom to shoot non-union jobs in ways that signatory agencies cannot. SAG-AFTRA actors working a non-union job, however, can face disciplinary charges.

Droga has denied the union's charges. "Droga5 remains a non-signatory to the SAG commercials contract, enabling us to engage in non-union shoots when it is deemed appropriate," the shop said in a statement to Ad Age on Monday. "However, when managing SAG productions, we always use SAG performers, which include any commercials for SAG-signatory clients or featuring any SAG celebrity talent. In those instances, we abide by SAG rules and pay SAG wages across the board. We do not engage SAG performers in non-union productions."

Droga5, of course, is not the only non-union agency. There are many other big-name shops that aren't union shops, including 72andSunny, Anomaly, along with many, if not most, digital agencies and newer shops.

Tension between the industry and the union has sprouted up in recent years as marketers have increased demand for digital content, whether that's paid, 30-second pre-roll spots that run on YouTube or other forms of branded content like long-form videos or Vine videos. Complicating the matter is that some digital videos may be deemed commercials by the union, which would require SAG-AFTRA actors, while others may not be. Brand budgets for these pieces of work tend to be low enough that agencies say they sometimes can't afford union talent.

That demand for digital content also comes at a time when many hot shops that bloomed in the last 10 years are increasingly sought-after by advertisers and are not themselves SAG-AFTRA signatories.