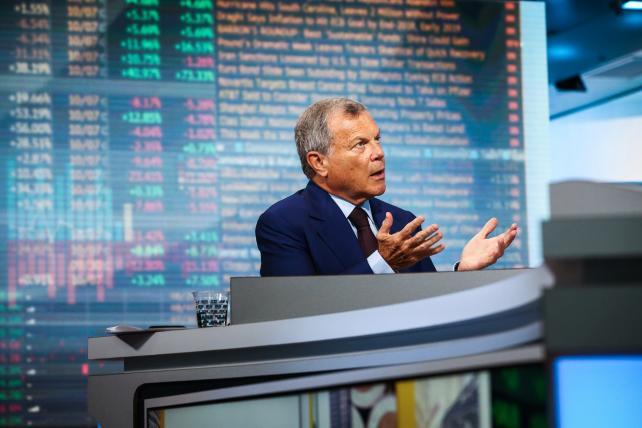 Battling a slowdown in client spending, the world's largest communications group cut its 2017 growth expectations to zero Tuesday, two months after an earlier downgrade. WPP started the year predicting up to 2 percent growth in net sales, before cutting its forecast to 1 percent in August, and then slashing it again today. Margins are also expected to be flat this year.

On the call, executives discussed the group's 1.1 percent fall in like-for-like net sales, its main trading measurement, to $4.1 billion for the third quarter of the year. WPP CEO Martin Sorrell talked about the slow conditions that make 2017 "a different kettle of fish" from recent years.

"It's not Facebook and Google; it's not consulting; it's the distortion caused by low interest rates" which has led to low growth, low inflation and limited pricing power, he said, speaking from New York to investors at WPP's third quarter results presentation in London. "You can't cut your way to prosperity. At some point you're going to have to invest ... otherwise you get a downward spiral in terms of volumes getting lower and lower."

In North America, like-for-like sales were down by 5.1 percent, following a 3 percent fall in the second quarter. The weak results were ascribed to general "softness," which won't have been helped by the loss of two big accounts, VW and AT&T, and lower spending from Procter & Gamble and Unilever. Sorrell announced that the region is "our biggest geographical area of concern and focus."

'Unacceptable practice'
Also on the call, Sorrell accused Ascential, which runs the Cannes International Festival of Creativity, of demanding that one of its agencies enter a separate awards program if it wants a chance to help judge Cannes.

"One of our agencies in Europe has been told that they will only be considered for a position as a judge at Cannes if they enter the Eurobest awards [also run by Ascential]," he said. "We think that's unacceptable practice."

The remarks came in response to a question about the cost benefits of entering awards. Sorrell said many people at WPP thought Publicis Groupe's withdrawal from next year's Cannes was a "wise decision."

WPP, Sorrell said, has put a series of proposals in front of Ascential, but, "We've found their response to date is not meeting our objectives. We haven't come to a final decision as yet but we are seeing whether there is a meeting of the minds, principally around costs ... We are still waiting for an adequate reponse."

The attack on Ascential came right at the end of a presentation that lasted well over two hours.

Western continental Europe was down 0.9 percent, an improvement on the second quarter's 3.2 percent. The combined territories of Asia Pacific, Latin America, Africa and the Middle East, plus Central and Eastern Europe, together fell by 0.4 percent, just down from 0.3 percent in the second quarter.

WPP's home territory, the U.K., was the only place to generate revenue growth: like-for-like revenues were up 1.8 percent (down from 5.8 percent growth in the second quarter).

Sorrell–whose link went down for a few minutes during the presentation–introduced three digital global CEOs to help with answering questions: Mark Read from Wunderman, Jon Cook from VML and Brian Gleason from Xaxis. The move could just have been an attempt to spread the load during a long call, but with Sorrell under pressure over his succession plans, putting the spotlight on WPP leaders could be significant.