Southwest Airlines Looks Beyond GSD&M, Its Agency of More Than 30 Years

Airline Circulates RFP to Several Shops for a Piece of Its $250 Million Account
READ THIS NEXT
Advertising must become 'the change it claims it wants to see': Uncomfortable Conversations

Southwest Airlines has worked with Omnicom Group's GSD&M for more than three decades -- and has long credited much of its success to its advertising. But now the airline is looking beyond the Austin-based agency for new creative resources, Ad Age has learned. 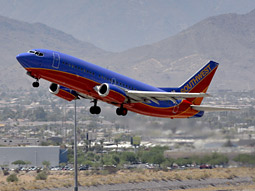 Southwest Airlines
According to three executives familiar with the matter, Southwest has hired Santa Monica-based consultancy Select Resources International to help conduct an agency-review process, and a number of agencies have received a request-for-proposal document. While the review isn't expected to encompass the airline's full creative account, it does include a significant piece of the business GSD&M works on, including Southwest's fall advertising campaign.

"This is not something we do all of the time, but we have an opportunity to add an additional agency to the roster and have chosen this process to identify who that agency might be," Linda Rutherford, a spokeswoman for Southwest, told Ad Age . "As our business grows and service footprint grows...we are looking to add to the agency resources." She noted that the agency has in the past added other shops, such as WPP's VML and Wunderman for digital work.

It's unclear how long the review will take. "It's not on a strict timeline, but we obviously would like to have an agency chosen in order to have enough time for the agency to execute the fall creative," Ms. Rutherford said.

GSD&M declined to comment on the matter. The agency has been asked to participate in the process, and Ms. Rutherford said that regardless of the outcome, the airline will continue to partner with the shop. "We have a long, legacy relationship that has been an excellent one with GSD&M and we don't anticipate that changing." The review does not impact Southwest's media agency, Camelot Communications in Dallas.

Airlines aren't known to be huge advertisers, but Southwest has long been committed to investing heavily in marketing and has traditionally outspent many of its competitors, such as JetBlue. In Southwest's first year, the company spent 10% of its total capital on advertising, and has been vocal about the fact that in times of an economic downturn, it increases its ad budget.

Still, Southwest's desire to bring on another agency is surprising considering GSD&M has been steadfastly behind the airline's transition from a small, regional carrier to a national airline. For a time, the airline had its account split between the Austin-based shop and Cramer-Krasselt in Chicago, but eventually consolidated all of the creative work with GSD&M.

There is precedent for GSD&M hanging on to Southwest's account through a review, though. The agency takes much pride in its over-the-top pitch to keep the business back in 1990. In a list of the GSD&M's 40 best moments over the past 40 years, it celebrated its Southwest pitch as "a willingness to lay it all on the line and being happy to make fools of ourselves just to show how much we care. We sang. We danced. We serenaded our clients and rallied our coworkers. It was all too much, which turned out to be just enough to keep the account, and it made us what we are today."

GSD&M's co-founder and chairman Roy Spence is also quite close with Southwest's colorful founder and very-hands-on former CEO Herb Kelleher. When Mr. Kelleher was inducted into the American Advertising Federation's Hall of Fame last April -- with a bottle of his favorite Wild Turkey whiskey in hand as he approached the podium -- he shared the stage with Mr. Spence. And Mr. Kelleher, who chain-smokes, for years was the only person ever permitted to light up a cigarette inside of GSD&M's four walls.

In an interview with Ad Age Editor in Chief Rance Crain last May, Mr. Kelleher said that Southwest's marketing people are "more the center of attention than they might be in other companies."

He also explained the importance of CEOs being involved in advertising: "First of all, in terms of the congruency of the message to the outside world. Secondly, from the standpoint of saying to your employees what you want them to understand and believe in because they see and hear the ads as well, and you want to make sure that it's not inconsistent with your treatment of them. And thirdly, lots of times the CEO can authorize something that may start out as a joke or a lark."

In that case, he was referring to the time that GSD&M came in with an ad, as a joke, headlined, "Some airlines should have their asterisks kicked." And Mr. Kelleher said, "Run it."