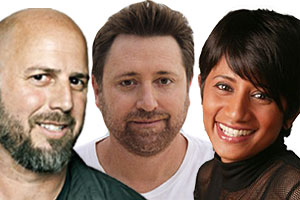 Wolfgang is part Stagwell Group's Marketing Incubator, which also includes digital advocacy shop Targeted Victory. While terms of the deal were not disclosed, Stagwell has an option to acquire a majority stake in Wolfgang in the future.

Mark Penn, president and managing partner of The Stagwell Group, said the Marketing Incubator allows Stagwell to come in at a minority position with options as the startups grow, and the startups can tap into the holding company network's services.

Wolfgang's first client project was for Uniqlo, which the agency recently completed, said Mr. Jeffrey, who added that the shop is focusing on its brand identity right now.

"The world doesn't need another ad agency," said Ms. Miller, which is why the trio decided to launch Wolfgang as a "creative consultancy," bringing together the expertise of management consultants and creative shops.

Ms. Miller said the three executives really enjoy "the creative problem solving part of working with clients," which can include launching a campaign or working through business strategies.

"I was immeasurably impressed with the way [Wolfgang] combined strategic planning with creative," said Mr. Penn. "We continue to fill out the marketing wheel and it's important to have people onboard that are at the forefront of advertising and creative."

Wolfgang, based in Los Angeles, has about 12 staffers at the moment, including freelancers, and is looking to bring on more people later this year who have a mix of left and right brain skill sets.

Mr. Geiger said he and his two partners liked the Stagwell model because it's a new type of holding company model that doesn't have dozens of the same types of agencies, but acquires shops that complement each other.

In January, Stagwell acquired Nielsen's Harris brand and the Harris Poll through its Stagwell Media fund. That acquisition – the holding company's fifth since October 2015 – was expected to bring Stagwell Group's revenue up to $250 million by the end of the year. Now, with that capital, Stagwell is up to $750 million in acquisitions, according to Mr. Penn.