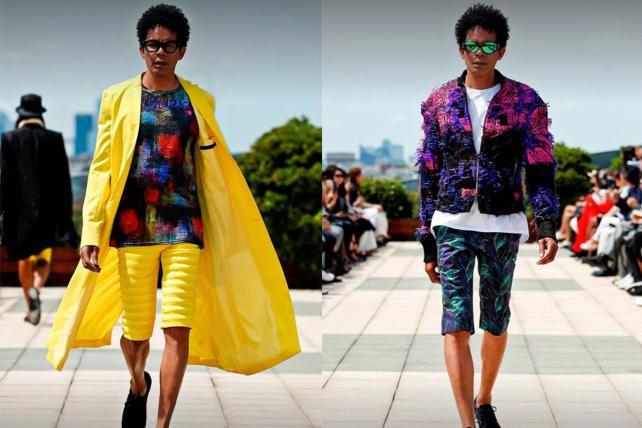 One risks sounding pretentious when name-dropping friends like Marlon Brando and Michael Jackson.

Aaron Walton doesn't. The co-founder of Walton Isaacson, who placed Brando in a commercial and toured with Jackson while working for Pepsi, has had a colorful history which has included runway modeling (the way he tells it, almost by accident) and meeting his future husband by rescuing his Walkman -- in a place called Kismet, no less.

Walton, who will be speaking at our Ad Age Small Agency Conference next week about client Lexus' partnership with Marvel Entertainment on "Black Panther," shared these six things you might not know about him.

1. I was one of only seven black children who participated in Boston's original METCO (Metropolitan Council for Educational Opportunity) school integration program.

Walton says he grew up in a segregated community in Massachusetts, and was one of the first children to take part in the program. The program was meant to give kids in certain areas a shot in "schools where the resources were much greater and kids had a bigger chance to get some of the benefits of more money in schools," he says.

The program also assigned "host families," which helped students feel at home in the new neighborhood and gave them a nearby contact. Walton's host, to the delight of his own family, was Dr. Benjamin Spock, the pediatrician and author of bestseller "The Common Sense Book of Baby and Child Care."

The experience, "transformed my life," he says, giving him experiences he wouldn't have otherwise had.

Walton met his future husband in a Fire Island beach community called — if you can believe it — Kismet. Walton was there with friends, while his future husband, Andrew Logan, was there for his father's 50th birthday. While Logan took a swim, his Walkman was too close to the water, so Walton retrieved it. The two realized they had lots to talk about when it comes to music, theater and art. They had a commitment ceremony in 2005, and were legally married in 2013.

Walton worked in marketing at PepsiCo in the early 80's during the tenure of Roger Enrico (who spent 30 years at PepsiCo, including as CEO from 1996 to 2001). Pepsi was looking to connect with pop culture in a way competitors weren't, Walton says. The company "was very focused on how do we tap into the zeitgeist of what's going on right now?" he says. "We all kind of agreed music was one of the ways in which we'd be able to connect with these younger consumers."

Walton had been set to start working for Pepsi's head of advertising in-house, but was plucked to work on Michael Jackson's solo tour (sponsored by Pepsi), having already worked with David Bowie, Tina Turner and Gloria Estefan.

4. I've walked the runway in Paris as a model for Japanese designer Rynshu during men's Fashion Week for the past six years.

Walton never set out to be a runway model. All he wanted was a new headshot, and he wanted one that didn't look "like it was a sophisticated version of my high school yearbook." He asked his friend, fashion photographer Kal Yee, to do the photos. Walton learned Yee did photography for the Japanese designer Rynshu, whose suit he wanted to wear for the photo, so he asked Yee to help him get a suit by the designer. Rynshu sent over the suit, then Yee shared the photo with the designer -- who asked if Walton would be interested in walking in the Rynshu Paris show.

"I laughed and the first thing I said was, 'You're asking a gay black man if they want to walk in a fashion show in Paris? Why are you even asking? Of course," Walton says.

Now he goes to walk in shows every January and June, he says. "There's a lot to be said about being silent and learning and not being in charge."

5. My mother is a minister for the United Church of Christ

Now retired for the most part, Walteon's mom performed the commitment ceremony with his husband. "She is an amazing woman," he says.

6. I placed Marlon Brando in his first commercial

Michael Jackson's assistant was Miko Brando, Marlon's son, so it wasn't long before Walton became family in his own right -- today he's Miko's son's godfather, he says. "I became very close to that family."

Walton asked if Marlon Brando would be interested in taking part in a Godfather-themed commercial in which young Hallie Eisenberg notices she's been served a Coke instead of a Pepsi and calls the waiter out for it.

At the recording studio, where more than 15 people crowded in to see Brando at work on his voiceover, the actor started doing card tricks, Walton says. "He wanted them to feel comfortable -- he just wanted them to relax," he says.

After everyone had calmed down, Brando took out his red pen and did a little work on the script.

"He changed it and it was way better," Walton says.

He did one "pretty perfect" take, with two more just to be safe, and this was the end result: